You are here: Home>Parish Priests of Menlough>08 -- Fr James Moran 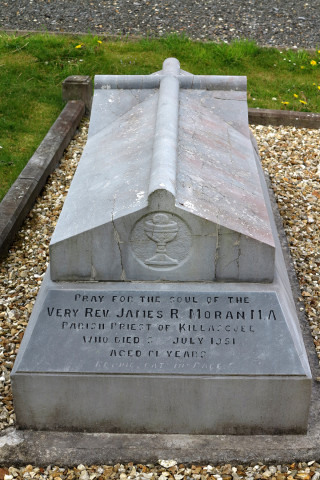 The inscription on the gravestone of Fr. James Moran at Menlough
© Gerry Costello Photography

Fr James Moran was a native of Westport. He was son of James & Mrs Moran, Merchants, Westport. He was a brother of Dr. Martin Moran. He was born in 1890 and ordained in June 1915. In 1915 his first appointment was as Professor of Greek in St. Jarlaths College, Tuam. in 1930 he was CC in Claremorris. In 1943 he was CC in Cong. From Cong he was appointed PP of Menlough in 1946. He passed away after a brief illness at Seamount Nursing Home, Galway on July 3rd. 1951 aged 61 years. He is laid to rest in Menlough Church grounds.