You are here: Home>Parish Priests of Menlough>11 -- Fr Jarlath Canney 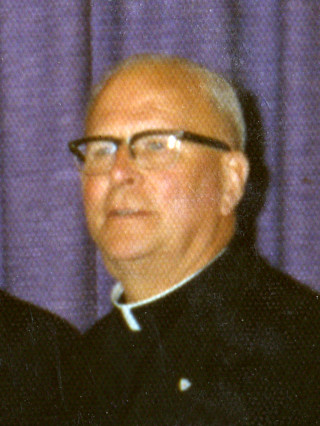 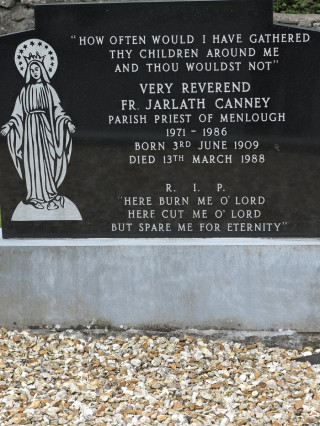 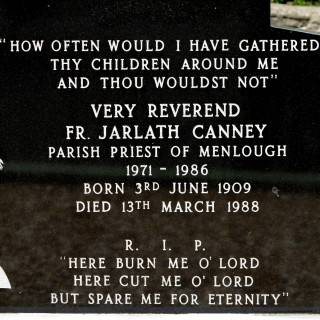 Fr Jarlath Canney was a native of Tuam. He was born on June 3rd. 1909. In 1938 he was CC in Clonfad. In 1941 he was Adm of Clare Island and Innisturk. Before going to Clare Island he spent three years on the Nigerian Mission. In 1945 he was CC in Balla. In July 1950 he was changed from Balla to become CC in Westport. In October 1954 he was made CC of Glenamaddy. By 1959 he was CC in Claremorris. In September 1963 he once again found himself assigned as CC to Clonfad. His father, Edward G Canney, a prominent Tuam drapery business man and Town Commissioner passed away at the age of 89 in February 1964. In 1968, he got the people of the Clonfad area formed into a co-operative’and a knitting and crochet work scheme was begun in September. Rev. Fr. Canney made a saler,-promotion trip to America and returned with a £10,000 order from Canada and a first order worth £1,000 from a leading New York fashion store. He was appointed PP of Menlough from Clonfad in 1971 and remained there until his death in in 1988.

He was very interested in keeping bees and, indeed was very successful in this area. He extended the church after his arrival in Menlough which caused much controversy and discontent among the parishioners as he moved all headstones to the outer boundary walls and dug up the graves that were in the way of the developments. For a time, broken up coffin pieces and bones were strewn against the outer boundary walls of the church yard. Consultation, patience and working with with the parishioners and people in general were not, to say the least, his strong points. He was dictatorial in his attitude and approach in all parochial matters. To use his own words :– One day at a wedding I happened to be covering, a Bishop from another Diocese was present. This did not seem to please Fr. Canney. He made it clear to all present that “he was the Parish Priest of the parish of Killoscobe and he had ultimate powers within the parish and that no Bishop, including his own Archbishop, had the authority to come into his parish without his permission first.”

As time went by his sight deteriorated but he still insisted on driving. I can remember one memorable occasion in 1985 driving behind him from Galway and, even though he drove quiet slowly, it would have been extremely dangerous to have overtaken him as he was using both sides of the road for guidance. In the mid 1980’s, following a Parish Mission, it is reported that the missioners informed the Archbishop of the danger he was creating on the roads. He was asked by the Archbishop to retire which he did unwillingly in 1986. Even though he retired in 1986 he refused to leave the parochial house so that for two years his successors, both Fr O’Malley and Fr Divine resided in a house across from the Church in Church View.

Fr Canney passed away at the Portiuncula Hospital, Ballinasloe, on March 3rd. 1988 after a short illness. He is laid to rest in the grounds of Menlough Church.