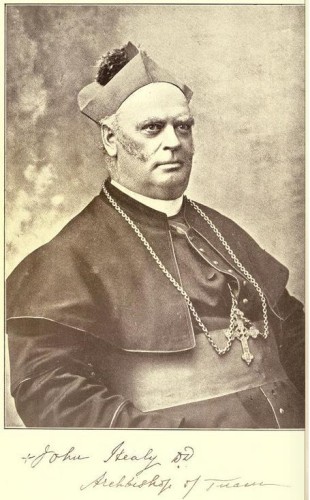 Born on 2nd January 1841 in Elphin, County Roscommon, Ireland, Healy was educated at Maynooth College, where he was ordained a priest in September 1867. He then served as a curate and parish priest in the diocese of Elphin, before being offered two professorial chairs at Maynooth, those of Theology and Classics. He accepted the first and held it until 1883, when he became Prefect of Maynooth.

He was appointed Coadjutor Bishop of the Diocese of Clonfert and Titular Bishop of Macri on 26th. June 1884. His episcopal ordination took place on 31st. August 1884. He succeeded as the Diocesan Bishop of Clonfert on 15th. August 1896. He translated to the archbishopric of Tuam on 13th. February 1903. He was also a Senator of the National University of Ireland (having been part of the campaign to establish it), a governor of University College, Galway, and a member of the Board of Agriculture. He once told Irish Nationalists that before demanding self-government they should make themselves fit for it. He died in office on 19 March 1918, aged 77.