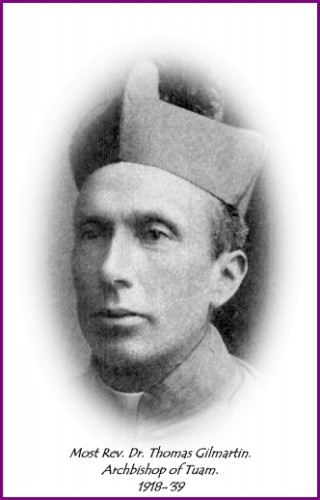 He was born in Castlebar, County Mayo, Ireland on 18th. May 1861, the son of Michael Gilmartin, Rinshiona, Castlebar. Following his ordination to the priesthood in 1883, he served as Dean of Formation and Vice-President of St. Patrick’s College, Maynooth. He was awarded a Doctor of Divinity by Rome in 1905. He was appointed the Bishop of the Diocese of Clonfert by the Holy See on 3rd. July 1909 and was consecrated on 13th. February 1910 by the Most Reverend John Healy, Archbishop of Tuam. On the death of Archbishop Healy, he was translated to the Metropolitan see of Tuam as archbishop on 10th. July 1918. Dr Gilmartin was involved in the controversy over the appointment of Letitia Dunbar (a member of the Church of Ireland and graduate of Trinity College, Dublin) to the County Mayo librarianship in 1931. He died in office on 14 October 1939, aged 78-years.

Dr Gilmartin wrote the Memoir of Primate Joseph Dixon in Healy’s ‘Centenary History of Maynooth’ in 1895. He wrote a number of other books on Church History, including the three volume A manual of Church History by Rev. Thomas Patrick Gilmartin, published by Gill, M. H., Dublin.