You are here: Home>Parish Priests of Menlough>12 -- Fr Charles O'Malley 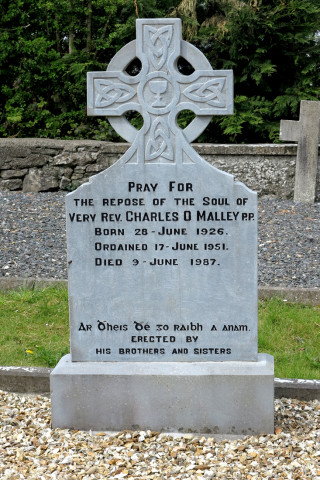 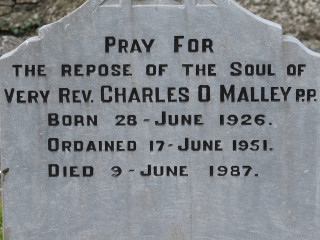 Fr Charles O’Malley, a native of Dunmore, Co. Galway was born on June 28th. 1926 the son of William and Bridie O’Malley, Carnaseer, Dunmore. His father passed away in October 1966 and his mother passed away in February 1969. Charles was educated at St. Jarlath’s College Tuam and was ordained in Maynooth by Dr. John Charles McQuaid, Archbishop of Dublin, on June 17th. 1951. His first ministry appointment, in September 1951, was as chaplain at the Franciscan Monastery in Corrandulla. In 1953 he was appointed as Adm in Innisboffin prior to his appointment as CC to Castlebar in 1959. He would spend the next 8 years in Castlebar and in 1967 he relocated to Kilkerrin, Connemara as CC but in 1968 he was once again appointed as CC to Castlebar. In 1971 he was changed from Castlebar to Kilcoona (Corner Chapel), Caherlistrane and in 1973 he left that appointment to become the Secretary of Epistopal for Emigrants where he spent the next 4 years. In 1977 he was appointed CC of Athenry where he remained for 9 years and in 1986 he was appointed parish priest of Menlough, on the retirement of Fr. Jarlath Canney, but after less than one year he died in the Blackrock Clinic after a serious illness on June 9th. 1987.

Rev. Denis Carney, who has served on Clare Island (and Innishturk) for a number of years has been provisionally appointed Parish Priest of Menlough, to succeed the late Very Rev. Charles O’Malley. P.P.