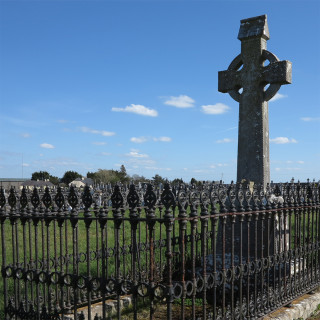 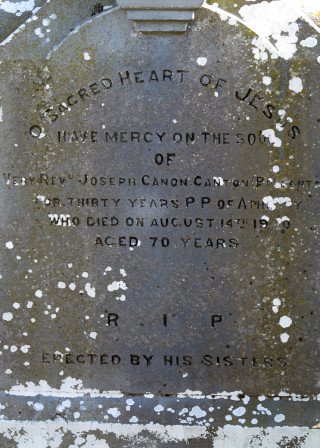 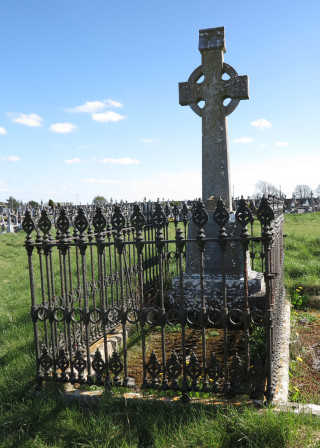 Fr Joe Canton was born in Castlebar on April 5th. 1850. After ordination on the 8th. November 1874 he was appointed a professor in St Jarlaths  College, Tuam. He was appointed CC in Skehana in 1876. After one year in Skehana Fr Canton was Transferred to Cong. In July 1878 he was recalled to Tuam and made Administrator of the Parish. During his time in Tuam he succeeded in purchasing the Presbytery for the priests of Tuam. In 1890 the late Most Rev. Dr. McEvilly appointed him parish priest at Letterfrack. After a short stay of a few months in Connemara, he was given charge of the parish of Athenry in 1891. By 1893 he was a canon of the chapter. It was announced in the Tuam Herald of February 27th. 1904 that Canon Canton, P.P Athenry, on relinquishing his Canonry, has been given the important position of Precentor of the Diocesan Chapter and took on the title of Vicar General.

In a report from the Connacht Tribune of March 1st. 1913 we can read the following;

SCENE IN A CHURCH.

MAN ATTEMPTS TO CUT HIS THR0AT.

On Sunday last after 11 o’clock Mass at Athenry, a startling affair took place in the Church. Just as the Very. Rev. Canon Canton,. P.P. was beginning to address the congregation, a respectable farmer named Matthias Toole pulled out a pocket-knife and made a determined attempt to cut his throat. Fortunately there was beside him a strong young man named Patrick Keane, who at once grasped the man’s hand which held the knife, and prevented him from doing any harm. The poor man was conveyed home. From what can be gathered, he was showing signs of religious mania of late.

We regret to record the lamented death of Canon Canton, the popular parish priest of Athenry, which occurred at the Parochial residence on the feast of the Assumption. The deceased  was born in Castlebar where so many priests came from. He was educated at St. Jarlath’s and some forty years ago was curate in Tuam and universally liked. He w«s appointed P.P. of Ballinakill, but Canon Mac-Andrew who was there and who by the way was another Castlebar man, not wishing to leave bis Connemara home for Athenry, he exchanged with Canon Canton and returned to Letterfrack. Since then Canon Canton has laboured in Athenry and has left many enduring monuments of his zeal and love for the beautification of the House of God. He got the fine gates from an adjoining demesne at Tiaquin and erected them at the entrance to the church which he also adorned internally with many improvements. Ha got an Order of Nuns to reside and teach in Athenry and never ceased doing good. The funeral on Wednesday testified to the general esteem in which he was held by all classes and creeds in town and country. He was a skilled musician and a beautiful and accurate chanter of the psalms He bad a beautiful voice. In consequence at great festivals he always led the clerical choir and as a mark of his skill he was appointed Preceptor of the Cathedral choir and Canon of the Diocese. His Grace the Archbishop presided at the Solemn Requiem Mass for the late Canon Canton at Athenry on Tuesday, and his Lordship Most Rev. Dr. O’Dea, Bishop of Galway, and about 50 priests were present in the choir. The celebrant of the Mass was Rev E. J McGough, C.C., Athenry; deacon, Rev John Greally, P.P., Abbey; sub-deacon, Rev Ml Daly, S.T.L., Diocesan Inspector:, master of ceremonies, Rev. Thomas Lynch, C.C Athenry.

I feel sure I am voicing the sentiments of all the priests here present when I say that in the death of Canon Canton the Archdiocese of Tuam has lost a most zealous, a most edifying and a most accomplished priest To you the people of Athenry we offer our most sincere sympathy on the departure of a pastor whom you all revered for his priestly character, and in your name and in the name of the priests we tender our heartfelt condolence to his respected sisters in their great bereavement.

Canon Canton was born in Castlebar on April 5th. 1850. Educated first at Sr. Jarlath’s College and afterwards at the Irish College, Paris. He was ordained Priest by Archbishop McHale in Tuam Cathedral on 8th November, 1874.

For tbe next two years he was professor in St. Jarlath’s. In 1876 he was appointed C.C of Skehana, Menlough from which mission he was transferred to Cong the following July 1877. From Cong he came to the town of Tuam in Feb., 1878, where he laboured for the next twelve years. In June, 1890, he was appointed P.P. of Ballinakill and from this parish he was transferred to the Pastoral Charge of Athenry in January, 1891. He became a member of the Tuam Chapter in 1893. For twenty-nine years then he was your pastor. You were the dally witnesses of his zeal, his piety, his fatherly kindness, and there is not I believe one amongst you to-day who was not personally known to the ” Canon” as you called him and who does not feel his loss as a personal sorrow. His lot was cast in troubled times, but tbe Canon was always a priest first. He had not a turn for politics but you all felt that he was always a true friend and a safe adviser. He was always most sensitive when the good name of Athenry was at stake, and it’s a remarkable thing that at the present moment when the clouds are thicker than they were perhaps ever before, I don’t know any part of the country where the people manifest greater unity and common sense than they do in this old historic town. ‘

Your pastor is indeed gone from you but he has left his parish in perfect order and his people full of zeal for God’s glory and of Christian charity. In giving an account of his stewardship the Canon will be able, I think, to point to a flock remarkable for faith, for piety, and for a spirit of order. When a priest comes to die after doing his work with the zeal and success that characterised Canon Canton’s administration, death can have no terror for him; On the contrary be will welcome it as the call to bis reward and I am sure that the Canon has gone from us to obtain the reward of the faithful and zealous servant. At the same time that reward may not be given mediately though the office of the priest is a most exalted one, bis responsibilities are great and be will have to render a very strict account and will perchance have to pass through the cleansing fire of Purgatory. You realise this , and therefore my dear people I feel certain that you will pray often and pray earnestly that God will remit any temporal punishment that may be due and bring to the happiness of the beatific vision the good pastor who was so invaluable a part of your lives for more than a quarter of a century.

The funeral took place after Mass to the Boyhill Cemetery about half a mile from Athenry. The Archbishop and Bishop, in their purple robes and the surplice’d priests beaded the cortage, chanting the “Miserare” and ” Da Profundis.” The Archbishop performed the last rites at the graveside.

To the Nuns of the Presentation Convent Athenry, his large Bookcase and all the Volumes of the Catholic Encyclopaedia.

To each of the Curates stationed at Athenry if he should die there, five pounds for Masses, the honorarium to be ten shillings for each celebration: the Masses to be offered in a Church or Churches open to the Public in Ireland, for the repose of the Souls of himself, his parents and relatives, and those who might have a claim on him.

After a further bequest, Testator bequeathed the residue of his property to his sisters, Mary and Catherine Canton, for their lives, and after the death of the survivor be bequeathed said residue to the Mother Superior of the Presentation Convent, Tuam, for the benefit of the Athenry Branch of said Convent.

Probate of said Will was, on the 6th day of November, 1920, granted forth of the District Registry of the Probate Court at Tuam, to Mary Canton and Catherine Canton, both of Athenry, the Executrices therein named.