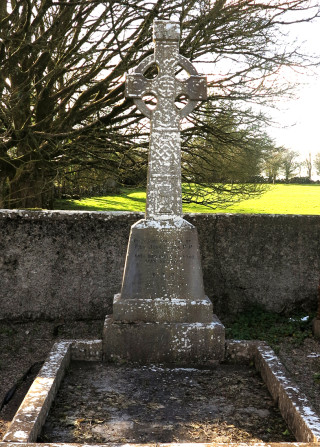 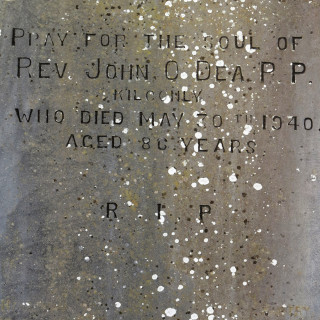 The inscription on the Headstone of Fr. John O'Dea.
© Gerry Costello Photography

From the Connacht Telegraph – March 14th. 1891 I quote the following;

DEATH OF MR M O’DEA. We deeply regret to announce the demise, on Tuesday last, of the above lamented young gentleman, which took place at Menlough, Co Galway—the residence of hi« brother, Rev John O’Dea, C C. The deceased was a talented and promising student of Maynooth College (being in second Divinity Class) and his gentle and agreeable manners even from his childhood, could not fail to win the admiration and esteem of all who knew him. To his respected brother, Father O’Dea, and his other afflicted relatives we tender our sincere condolence,  and pray that God may have mercy on the gentle soul of the dear departed.”

In 1907 Fr O’Dea was apointed CC in Islandeady. In 1911 he was appointed CC in Louisburg. He also ministered in Annaghdown. In October 1918 he was appointed PP of Kilconly and remained there until his death at the age of 86 in June 1940. At the time of his death he had a Baby Ford Motor Car, Milch Cow calved third calf one month; One two-year old heifer in calf; one yearling heifer, 2 year and a half old bullocks; donkey cart and harness; Root Pulper: large quantity of timber; number of farm implements; quantity of poultry; about 25 creels of turf on roadside at Castlegrove.