The final resting place and Gravestone of Fr Peter Varden in the grounds of Belclare Church.
© Gerry Costello Photography 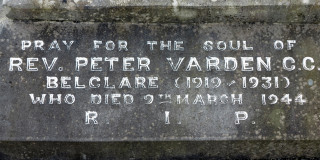 He passed away in a Dublin nursing home on Friday, March 10th. 1944 and on arrival by rail in Tuam on Saturday evening the remains, were met by His Grace, the Archbishop, and a number of priests and by many mourners arid sympathisers. They were conveyed by motor hearse to Belclare Church and the interment took place in Belclare on Sunday, March 12th 1944. His Requiem Mass, however, was not celebrated until the day after his burial which was on the Monday of March 13th 1944. He is laid to rest in the grounds of Belclear Church.