• A knob of butter 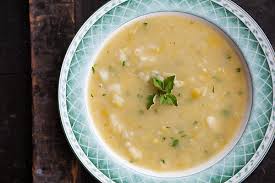 Mix the milk and stock together and pour into a saucepan.

Add the butter, bring to the boil and then add the oatmeal, stirring well.

Return to the boil and simmer for 10 minutes stirring occasionally.

Add the leeks and seasoning, return to the boil and simmer for a further 15 to 20 minutes, stir in the parsley a few minutes before the end of the cooking time.

Serve garnished with a swirl of cream if desired. 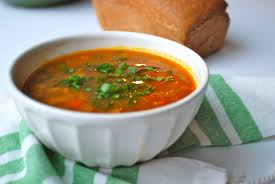 • 2 sticks of celery, trimmed and sliced

Place the meat, peas and water into a pan.

Bring to the boil, skim, then cover and simmer for ½ hour.

Add the pearl barley, vegetables and salt, bring back to the boil and simmer for a further ½ hour.

Remove the meat and when cool enough to handle remove the bone and cut the meat into pieces.

Return the meat to the soup, add the parsley bring back to the boil and simmer for 15 minutes.

You can also boil potatoes in the soup or boil them separately but each bowl of farm soup should be served with at least one potatoes.

Its also recommended to serve this soup with home-made bread and butter. 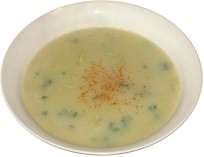 Cut the hard green part of the leeks off and discard. split the leeks lengthways and wash thoroughly in cold water to remove any grit. Drain and pat dry with a clean towel. Cut a piece about 2″ long from one leek and set this aside. Slice the rest of the leeks into pieces about 1″ thick.

Melt the butter in a saucepan over a medium temperature and add the onions, leeks, celery, garlic and potato. Stir to coat the with the butter and ‘sweat’ them in the saucepan for about 5-7 minutes.

Pour the stock into the saucepan, bring to the boil then reduce the heat and simmer for about 20-25 minutes.

Pour into a blender and zap until smooth. Season to taste with salt and pepper. Slice the piece of reserved leek very thinly and add it with some roughly chopped parsley to the soup. Return to the heat to simmer for about 5-10 minutes before serving. I like to sprinkle a little (very untraditional!) paprika on top before serving.

Cockles are a small, edible, saltwater clam that can be found in sandy beaches during low tide. Gathering cockles still remains the same as it once did hundreds of years ago, all by hand. With Ireland having some of the best beaches in Western Europe there are plenty of cockles to be found.

Soups made with seafood have always been popular in Ireland such as cockle soup. 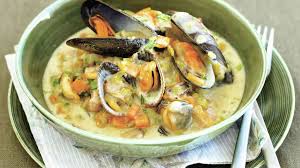 • 1 stick of celery trimmed and finely chopped to garnish

Wash and scrub the cockles well, discarding any that are open.

Place in a saucepan with just enough lightly salted water to cover and bring to the boil, shaking the pan from time to time.

Cook until the cockles open. When cool enough to handle, strain the cockles, reserving the liquid, and remove from the shells.

Melt the butter in a pan and seat the onion gently until soft, stir in the flour and cook for 1 minute.

Mix the cockle liquid and milk together add gradually to the flour mixture, stirring until smoothly blended.

Add the celery cook for 5 minutes, and then add the parsley and seasoning.

Bring to the boil, simmer for 2 to 3 minutes then add the cockles and heat through.

Stir in the cream and heat gently but do not boil.

This is however a traditional Irish dish that turns these highly stinging nettles into a lovely soup, nettle soup to be precise. First collect fresh nettle tops to be added to the soup. We highly recommend collecting nettles deep in the countryside, the further away from vehicle traffic the better. 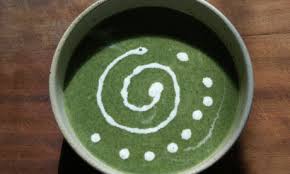 Melt the butter in a pan and fry the oatmeal until golden, stirring continuously.

Add the stock and bring to the boil.

Add the nettles and seasoning. Reduce the heat and simmer for 40 minutes until tender and well blended.

Puree in a blender and return to the heat before serving.

The recipe for nettle soup can be found all over the world and although the exact origins is unknown it would have been a very popular soup dish in Ireland for at least a couple of hundred years. Ireland has no shortage of wild nettles growing all over the island and with this soup being basic and very easy to cook it was a perfect dish for those with little to survive on.