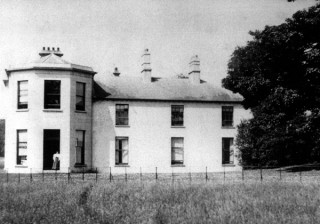 The townland name of Windfield Demesne dates from the construction of Windfield House by the Blake family in c.1771. The reason for this is, with the arrival of the landlordism era, the area of ground, or demesne, attached to many of our ‘Big Houses’ often had that description attached to end of an existing townland name or may indeed be given a complete new townland name. Other examples of this locally include Monivea Demesne, Ryehill Demesne, Abbert Demesne and Tiaquin Demesne among many others. The demesne normally was farmed by the landlords themselves, where they would have their own staff or employees, while other adjoining townlands over which they may have held control would normally be leased to tenant farmers.

The title Windfield as in the townlands of Windfield Demesne and the adjoining townlands of Windfield Lower and Windfield Upper is very much a complete English word while, with these exceptions, every other townland in the southern part of Moylough civil parish has either a gaelic name or a gaelic name with an anglicised spelling. It may indeed be significant, rather than a coincidence, that the ruling Blake family also held control of six neighbouring townlands in the Abbeyknockmoy civil parish with Brierfield as only the first part of their title and again this can be best described as an English title. The word Windfield is likely to have drawn its title from a broad expanse of ground, bordering Gilkagh, which is quite exposed to prevailing westerly winds.

Though townlands have Gaelic origins and even pre-date the Norman invasion of 1169 many changes to those names and areas would have taken place as a result of those very same Norman invasions, Cromwellian plantations, Ordnance Survey mapping projects as well as other national initiatives to formalise these divisions. The names of many of our townlands as we know then today would have changed, perhaps even several times, since their initial naming.

The earliest definitive name for what is today the townland of Windfield Demesne dates to 1640 when the area is recorded in The Down Survey and titled Turloghgarrandana. This translates as ‘the turlough in the copse’. A turlough is a low-lying area on limestone which becomes flooded in wet weather through the welling up of groundwater from the rock while a copse is a dense wooded area of either low growing trees or bushes growing in very close proximity to each other. This definition comes from the area now known as Poll Ifreann, which translates as ‘hells hole’ and this is located in Windfield Demesne townland and is referenced and noted in the very first six inch ordnance survey maps of 1838. Local folklore has always held that is a bottomless mass of water hence probably leading to hell.

Windfield Demesne has as its northerly neighbours Windfield Lower and Brierfield South, Cloonkeen to the west, Guilkagh and Windfield Upper to the south and Ballinrooaun to the east. The townland, as it was exclusively for farming associated with Windfield House, was naturally sparsely populated and only a herds house and perhaps those of a few others also who were involved in the estate upkeep. It is a townland that in many respects has remained unchanged in over two hundred years and indeed it was not until the 1940’s that the first new residence was built in that townland and even since then a mere handful of houses have been constructed. The primary reason for this is that most of the families who now farm the former demesne live in neighbouring townlands. All three of the Windfield townlands were part of the original Turloghgarrandana and only acquired their individual identification with, or shortly after, the construction of Windfield House in 1771.

Without doubt the most dominant feature of Windfield Demesne was the existence of an expansive landlords estate and its focal point being Windfield House. The entire demesne was enclosed by a combination of a double limestone stone wall, with lime, in the more easterly section and a moat or water boundary to the west. The estate house and adjoining yard would no doubt have been comparable to the finest specimens in this general area and apart from the main two-storey residence, with a basement, it was set in the centre of a tree-lined main road entrance setting out from a gate lodge, that is still a residence to this day, a back road entrance, a walled fruit garden with pathways and walkways, a high-walled deerpark and a yard that would have outhouses for farm animals, coaches, workshops, a laundry, an aviary and numerous other facilities for the running and maintenance of such an enterprise.

The townland is also home to An Curraghaun which is an extremely significant site locally, nationally and internationally. The gaelic word ‘curragh’ translates as a ‘moor or a place of heather and heath’ and ‘curraghaun’ further translates as a ‘small moor’. There were at least three very distinct activities that can be confirmed as having taken place here. Firstly, and perhaps most significantly, it contains a childrens burial ground, or Cilleachan as it is known. These ‘Cillini’ were resting places for individuals considered unsuitable for burial within consecrated ground by the Roman Catholic Church and traditionally associated with the burial of infants primarily, though not exclusively, who had died before they were baptised.

Secondly it is the site of the grave of James Francis Jameson of Windfield Demesne who died in 1896 and who was the son of Reverend John Jameson  and great-grandson of John Jameson the founder of The Jameson Distillery in Bow Street in Dublin. James Francis Jameson’s burial place is marked by a limestone Celtic Cross gravestone, with inscriptions, and the grave surround is identified by limestone kerbing.  These in turn are surrounded by a limestone wall with iron railings and an iron gate entrance.

Thirdly this site was most likely the location of an ecclesiastical enclosure that would perhaps have been there before the childrens burial ground. The rectangular remains of three building remain, and there may be others, and they indicated a settlement of this nature given their size and the subsequent selection of this area of the purposes of burials.

The eastern section of the townland is on raised ground and is composed of extremely rich grazing pasture while further in the lower lying western area is Poll Ifrinn bog and in between these contrasting land areas is a narrow strip of more marginal ground. This area of bog was divided among the tenants of the locality in the 1920’s and turf is widely harvested to this day. A section of this area is a turlough, referred to earlier, and this is the source of a short river that has a confluence with the Abbert River in the nearby Cloonkeen townland.

By 1641 the townland was owned by a Catholic landholder, Lord Clanmorris, immediately before the Cromwellian invasion of the late 1640’s. Lord Clanmorris was a very considerable landowner in the general as he also held control of Derryglassaun, Pollacrossaun, Gorteendrisagh, Gortnaglogh and Knockcorrandoo as well as Eskerroe in Killoscobe parish while it is also interesting to note that Lady Clanmorris was the owner of Clonkeenkerrill, then Clonkine, in Clonkeen parish. Windfield Demesne land was bestowed on the Protestant and most powerful Earl of Clonricard who also owned much of the land within the entire County of Galway. However the disintegration of the Clonricarde estate began with the sales and mortgages of the high-spending 4th earl and the large unsecured borrowings and unredeemed mortgages of the 5th earl.

Ownership of Windfield was to pass to another prominent family, the Blakes, when they purchased this area in 1703 and under the will of John Blake 27 Feb 1786 the estate now passed to his cousin John Blake of The Heath, county Mayo, a younger son of the Blakes of Renvyle. Initially the Blakes had their residence in Mullaghmore and actually built Windfield House, probably about 1771, and established a walled and part moated demesne. Mixed marrieages and the effects of the Penal Laws were factors peculiar to Galway families and particularly the Blakes. In 1823 Henry Blake, at that time residing in Edinburgh, brough an action for divorce against his wife on the grounds of adultery. The original family records of the Blakes of Windfield and Mullaghmore had been handed down in the senior line of that family and they almost became a victim of the domestic troubles at Windfield. After the estate was sold in 1824 Henry Blake put little value on his family records and in 1835 he sold these to his friend and neighbour Michael Browne of Moyne. Browne preserved the collected and presented then, in 1870, to Maurice Blake of Tower Hill in Mayo and these records are an invaluable source of information as they date back to their first grant of land in Galway in 1278.

This estate was purchased, in 1923, by the Jameson’s who were a Dublin family well known in the 19th century distilling and banking circles of that city. James Jameson bought the Windfield estate from the Blakes in the early 1820s. He was succeeded by his eldest son the Reverend John Jameson in 1847 and the family continued to occupy Windfield until the early 20th century, although they also had a residence at Montrose in the Dublin suburbs and this house still stands on the grounds of the RTE studios. It is also worth noting that John Jameson’s brother, Andrew, was grandfather to Guiseppe Marconi who today remains an iconic figure in the world of communication as the inventor of the wireless. The Jamesons originally came from Alloa in Scotland and John, who founded the Dublin distillery in 1780, was originally a lawyer and he married Margaret Haig whose brothers were already in the whiskey business in Scotland and had extensive whiskey interests in Dublin. John Jameson and his wife Margaret acquired the Bow Street Distillery in Dublin in 1780, hence the whiskey brand Jameson 1780, and at that time it was producing about 30,000 gallons annually. By the turn of the 19th century, a mere thirty years later, it was the second largest producer in Ireland and one of the largest in the world, producing one million gallons of whiskey annually. Dublin at the time was the centre of world whiskey production and it was the second most popular spirit in the world after rum and internationally Jameson had, by 1805, become the world’s number one whiskey.

Historical events set the company back, for a time, as the temperance movement in Ireland had an enormous impact domestically but the two key events that affected Jameson were the Irish War of Independence and subsequent trade war with the British which denied Jameson the export markets of the Commonwealth, and shortly thereafter, the introduction of prohibition in the United States.

In 1966 John Jameson joined forces with Cork Distillers and John Powers to form the Irish Distillers Group. The New Midleton Distillery built by Irish Distillers produces most of the Irish whiskey sold in Ireland. The new facility adjoins the old one, now a tourist attraction. The Jameson brand was acquired by French drinks conglomerate Pernod Ricard in 1988, when it bought Irish Distillers.

James Frances Jameson’s wife, Helen Maud Jameson, who was also his first cousin, was the last of the Jamesons to reside in Windfield but she perished on the City of Dublin Steam Packet Company mail steamer, RMS Leinster, in the Irish Sea on October 10th, 1918 when it was sunk by a torpedo from German submarine UB-123 while bound for Holyhead. The estate was finally divided and given to local farmers and while Windfield House no longer stands many very important from this bygone era remain and should continue to be preserved.