Farewell To The Fit-Ups

Story of Paddy Dooley from Headford 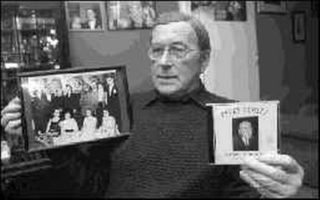 The heady days of the travelling fit-up shows are remembered by Portmarnock man Paddy Dooley. At the tender age of 16 years, Paddy ran away from the Salesians Order where he was studying for the priesthood, to join a touring fit-up company. The ‘Fit-Ups’, were the travelling shows that went from town to town around Ireland. They were so-called because the actors literally transformed or fit up each town hall they visited, from arranging the seating to organising the lighting and building the stage. Paddy’s CD, ‘Farewell to the Fit-Ups’ is a tribute to days gone by and includes a selection of 12 beautiful monologues – most of them never before recorded! He explains his reasons for recording the recitations. ‘Being part of the fit-ups for over 30 years transformed my life totally. I feel I owe this CD to the great audiences of those years and to the fit-up artists who were servants to their great art,’ said Paddy, a fit and handsome 73-year-old. Born in Headford in Co Galway, Paddy doesn’t remember his family being particularly artistic.

‘I don’t really know where my love of theatre and acting comes from. But when I was younger I loved sitting round the radio with my family listening to the Abbey plays. Perhaps it started there.’ He has forever regretted the effect his running away from home in 1946 had on his darling mother. ‘My mother was very religious. She was an adorable woman and I loved her very much. I felt remorse for years. I remember the look on her face, a mix of joy and sadness. Perhaps that’s why I’ve been involved with organising events for the senior citizens, to give something back.’

Paddy joined a company called the Tara Players run by John Cowley and Annie Dalton. They later became household names when they starred in ‘The Riordans’, the long running RTE television series. Paddy has performed in a wide range of roles, from parts in O’Casey’s and Yeats’ plays, to sketches in plays such as ‘Murder in the Red Barn’ and ‘The Girl of the Golden West’. ‘I remember my first day with the fit-ups. I arrived on the bus from Galway and was met at the station by some of the actors who brought me to my digs. I remember feeling very hungry and the smell from the oil lamps up at the hall. ‘I was put up on stage that first night and I was so nervous. I was more an actor than a singer or entertainer but I soon learned and I loved it.’

Around this time Paddy met and married a young English actress, Liz Luling and started his own touring company ‘The Starlight Players’. The couple had two daughters and they toured all over the country performing. Sadly, Liz died and the children moved back to England to Liz’s parents to be educated. Later on Paddy met Rachael Glynn and married her. The happy-go-lucky family continued to tour around Ireland. But the good times cannot last forever. By the late 1960s Paddy and Rachel have four children and Rachel is keen to settle somewhere so they can be educated.

Television took its toll on the size of the audiences and they decided to settle in Portmarnock, firstly in Rose Cottage Caravan site, run by Phyllis Duffy, and later in a house on the Carrickhill Road. ‘For 22 years I was part of the never ending world of the travelling show. It was such a joyful time though that’s not to say we didn’t have difficulties. We often didn’t have much money and could nearly go hungry,’ said Paddy. Although the Dooleys have organised Fit-Up Reunion Dances for 12 years it was only last year that he had the idea of producing a CD.

‘I was at a funeral and the nuns from Scoil Íosa heard I was in the fit-ups. They said I should record some monologues. So I was in Germany with my daughter during the summer and I went into a studio and recorded them.’  Amazingly as he hasn’t recited many of the monologues in 30 years Paddy remembered them off-by-heart. ‘I never had a script and I did each recitation in one take. I was dead letter perfect, as they say in this business.

‘The CD is a tribute. I feel I owe it to the audiences who came to the shows as in a few years there’ll be no one left who remembers. Whatever you do make sure you do it sincerely. Don’t be smart as it comes across to the audience.’ ‘Farewell to the Fit-ups’ – Paddy Dooley’s CD produced by his daughter Lorna has just been released. The CD is available in the shops in Portmarnock or it can be ordered from Paddy on (01) 8463774.