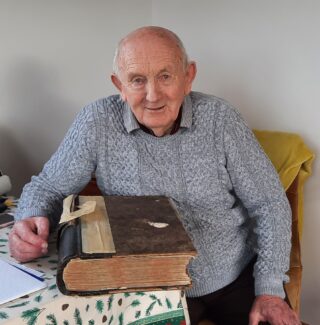 Ffrench’s rent ledger is dated 1875 and comes from the Ffrench’s family estate in Monivea. This book was saved by a local man John “Johnny” Dolly when he was a young teenager. The Ffrench estate had been demolished and items were being sold and burned and Johnny had the mindset at that young age to pick up one of the books and saved it. Johnny took the book home and it’s been with him for over 70 years. Johnny has kindly donated this beautiful book to the Galway library where it will be kept safe in the Galway County Archives for many years to come.

Contained in the book is details of names of local people who were tenants renting homes and land from the Ffrench family. Many of the local names you will recognise and many of whom still live in the area today.

I’ve included some photographs of the book. In one photo there is a picture of Johnny Dolly the day he donated the book and the other photo’s shows the year the ledger was written 1875 and an estimate to build a forge in Kilbeg for Johnnys Great Grandfather Peter Dolly who was theFfrench family, master blacksmith. The Ffrench’s were well known and liked by their tenants as they were treated fairly.