You are here: Home>New contributions>Performing Since the Age of Three

Performing Since the Age of Three

I’ve been performing since the age of three. Nobody gave me a choice. 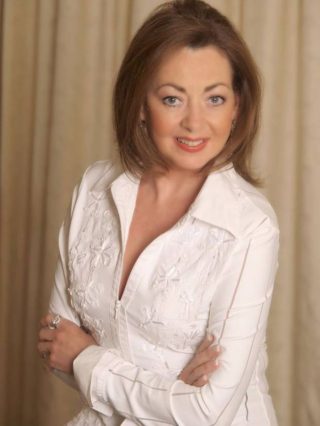 Sandy Kelly has had many remarkable moments in her lengthy musical career. Born Philomena Ellis, in Sligo, in 1954, she had one younger sister, Barbara, who sadly passed away in October 2018, and her baby brother, Francis, who died when he was five months old. Her family business was a ‘fit-up’ roadshow which travelled the country entertaining people long before cinema came to rural Ireland. “I was born into a family of travelling entertainers, or ‘fit-ups’ as we were called. My grandfather, originally from Belfast, was the founder of the Dusky Dan Variety Show, and my father, Frank, who passed away in January 2013, carried on the tradition. There was no cinema or television in rural Ireland back then so crowds flocked to our visiting roadshows. One of my first memories is of arriving in a village on a horse-drawn trailer. The ‘venue’ would consist of a small canvas circus-like tent for the show. We lived in the caravans that travelled the countryside”.

“Now, I realise that I was moulded like a robot for showbiz which, looking back, wasn’t always such a good thing for a child. I quickly learned the value of applause. For a while, I didn’t appreciate the fact that I was an entertainer. I wanted to be a ‘regular person’ living in a house, going to school and church, so when I was nine I went to live with my grandmother. My classmates called me ‘the showman’s daughter’. I even studied accountancy for a while — but I ran back on stage when I realised I could earn more in one night with my father’s band than I could in a week at a normal job. The best advice I ever got was from my grandfather, Dan Ellis — ‘never make excuses when you go out on stage’. To this day I never do. I go out to entertain and take the audience away from their worries. They don’t want to hear about my problems”.

A stroke of luck

Sandy Kelly was sitting in a local radio station in Cavan on an ordinary day in 1989, when the telephone rang. The presenter, who had just aired her latest single, a cover version of Patsy Cline’s country classic Crazy, answered the call, then handed her the receiver. “There’s an American fella on the phone and he wants to speak to you,” he said.  Sandy put the phone to her ear and said, “Hello.”  ……….. “Hello,” boomed the voice at the other end of the line, “my name’s Johnny Cash.” Sandy, who didn’t believe the caller, replied, “Yeah, and I’m Dolly Parton, pull the other one, it has bells on it!”
But it really was Johnny Cash.

“He had been doing an Irish tour and was driving up the country with June (Carter) on his way to play a gig in Omagh,” says Sandy. “He asked me if I would like to come along and meet him. I said of course, so he told me to come back-stage and say hello when I got there. For a minute I thought I was dreaming!  I immediately called my husband, Mike, and asked him to meet me with a change of fresh clothes, and I headed for Omagh. When I got there I saw one of my own fans standing outside with a camera. I asked him if he would stand by, and get ready to take a picture of me with Johnny as Johnny came through the stage door. I told him it might be my only chance to get a picture with him, and he said he would do his best.  The stage door opened, out came Johnny and I jumped in for a picture. When I looked around my friend was after fainting, and was lying flat out on the ground with the camera on his chest. Johnny’s security guards came and lifted him up and put him lying on the bonnet of a car – it was all a bit crazy”.

“I introduced myself to Johnny, and he brought me back-stage. He called in his band and asked if I wanted to sing some Patsy Cline songs on stage with him that night. I sang four songs with him including Crazy and I Fall To Pieces. Afterwards he asked if I had any plans to go to Nashville. I told him that I had visited there in 1984, and had plans to go back soon. He told me to get I touch when I arrived. I went over that same year, and I looked him up. He invited me out to the house to meet his family, and production team. And then he asked me to record Woodcarver with him. It was such a wonderful experience.”

I don’t live showbiz. I’m quite shy when I’m off-stage. I find it difficult to mix on a normal social level. But I’m the cheekiest person when I’m performing; it’s nearly like a split personality. I work in a world full of egos, so my most admired trait in others is modesty. Especially when someone is very talented. I’d advise anyone on their way up that the key to success is not talent alone, but talent and persistence. And, you need to be ready for your big break — because you will probably only get one chance. I spent years being ready physically, cosmetically, vocally. And nothing happened. Then suddenly, my career took off when I met Johnny Cash.

One of my biggest faults — and I have many — is never taking time out for myself.

I’m a neat freak. Any free time is spent doing housework and cooking. My idea of happiness is having my family sitting around the dinner table. Misery is when someone is missing. My father passed away recently, leaving a massive void in my life. My biggest challenge so far has been having a special needs daughter — purely because of the worry of what will happen to her when I am no longer here. But our family are known for longevity. My mum’s mum lived to 106. I believe in a spirit world, not heaven and hell as presented by catholicism. But I do pray everyday, it stops me feeling alone, especially when I’m touring. I never go anywhere without a relic and rosary beads.