You are here: Home>People>Dan Kelly - Tailor

Resident of Carrowmore and one of last tailors to ply his trade in our community. 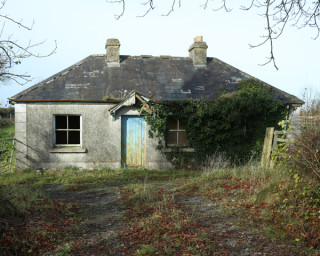 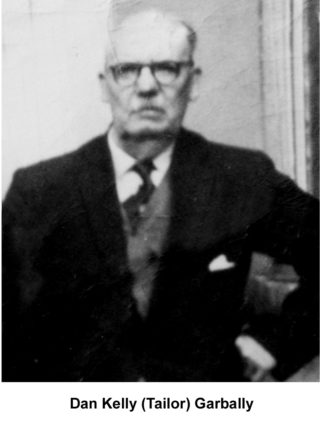 Dan Kelly was the local tailor in the 1950s and 1960’s in this area. He lived in what was always described as “a labourer’s cottage” in Garbally just the first on the right past Garbally Castle on your way towards Monivea. As a child I well remember being brought into Dan’s house by my grandfather who used to have Dan make suits for him from “suit lengths” he would buy when occasionally visiting my aunt in Dublin.

I am reliably told that Dan also had the contract to make uniforms for the Gardai of the area of Athenry. It seems that they were made to a specification and local tailors in every area were given the contract to make and supply as required. My grandfather, (and many more also), used to acquire old Garda uniforms from some friend they had in the force and they would be taken to Dan to be re-worked to take the Garda Uniform look out of the jacket and the big overcoat.

Dan would also take an old overcoat and maybe recycle it into something else like a pair of pants for a child. If someone had a jacket or coat and the elbows wore down then Dan would put leather patches on to get extra wear from the garment. Sometimes they would be put on a new garment to ensure that the elbows did not get damaged. Today leather elbow patches are somewhat of a fashion statement.

On entering Dan’s house you kept left and came into what was the kitchen and also his work room. Just inside the window on the left side of the door was his work table that was piled high with cloth and and materials.He was heavy built  in stature for the times and wore a cap and glasses and usually sat on the edge of the work table while you were in the house with him – it seemed as if this was his natural seat. It was the first house that I ever saw carpet on the floor.

I really don’t remember his wife but his daughter lived in the house with him always. She was called Dilly Kelly and I presume this was some shortened version for Delia. She was slight in build and very thin always with a quiet shy personality. She passed away at a young age in the early 1960s. Dan’s mode of transport was a bicycle. It was a ladies bicycle with a basket in front and slightly smaller in overall size than the average bike. They always looked like an odd combination as Dan was on the large side for such a small bike.