The Blakes of Vermount 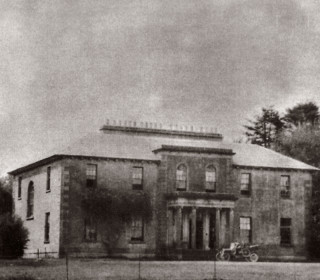 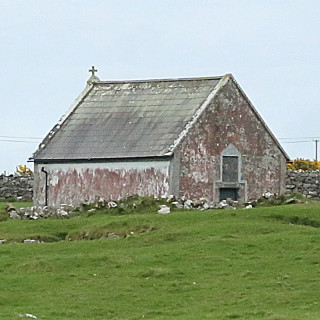 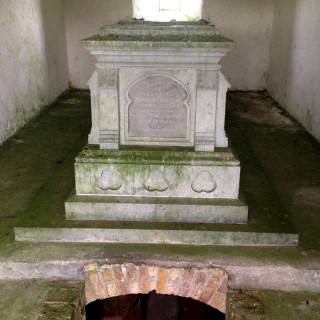 The Altar and Crypt Entrance underneath
© Gerry Costello 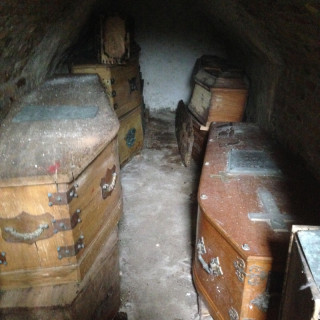 The Coffins within the Crypt
© Gerry Costello

Blake (Waterdale & Vermount) – In the early 19th century a junior branch of the Blakes of Kiltullagh, parish of Oranmore, barony of Dunkellin, county Galway, leased the Waterdale property in the parishes of Claregalway and Annaghdown, barony of Clare, from the Lamberts of Creg Clare. James Blake of Waterdale, purchased the French estate of Moneen or Vermont, parish of Killoscobe, barony of Tiaquin and died in 1821, leaving his estates to his nephew, another James Blake. This James Blake married his cousin Henrietta Blake of Kiltullagh and had an only child Elizabeth who married in 1854 her cousin Theobald Blake of Kiltullagh and Vermount. However when Theobald Blake died in 1902 without heirs, Vermount reverted to Elizabeth’s first cousin Nicholas Blake of the U.S.A. McHale writes that the estate was bought by the Land Commission in the early 20th century and that the house was burned down in 1923. Members of the Blake family are buried in a burial house on the estate.

Blake (Glenlo) – Martin J. Blake writes that Henry Blake of Glenlo Abbey, a medical doctor, was a grandson of Patrick Blake of Kiltullagh and a brother of James Blake of Cregg Castle. Henry Blake died in 1830. In the 1870s this branch of the Blake family owned over 1,000 acres in county Galway. The estate was advertised for sale in the Landed Estates’ Court in July 1883 and was comprised of Glenlo Abbey, Annaghmore West in the barony of Tiaquin and Ballynamordoon and Gortdrishagh in the barony of Leitrim.

Blake (Kiltullagh, Frenchfort & Vermount) – The lands of Kiltullagh/Kiltolla, parish of Oranmore, barony of Dunkellin, county Galway, were granted to Hugh Molloy by patent under the Acts of Settlement, to hold for Patrick Blake and his heirs until a sum of £700 was paid. The Blakes of Waterdale and Vermount were descended from James Blake, a younger son of another Patrick Blake of Kiltullagh. In 1780 Michael Blake of Kiltullagh married Anne, only child of Martin French of Frenchfort and thereafter Frenchfort was Blake property. At the time of Griffith’s Valuation Theobald Michael Blake held townlands in the parishes of Ballymacward and Killoscobe, barony of Tiaquin and a townland in each of the parishes of Oranmore and St Nicholas, barony of Galway. In the early 1870s he owned over 5,000 acres in county Galway. The Blakes of Frenchfort held the townland of Coollisduff, in parishes of Kilmolara and Kilmainemore, barony of Kilmaine, county Mayo, see OS Names books and Griffiths. Advertised for sale in 1856. Theobald Blake died in 1902 without immediate heirs and his Kiltullagh estate passed to his grand neice Dora Creagh and Vermount to his cousin Nicholas Blake. Miss Creagh submitted an application for assessment of the townland of Ballintemple, parish of Oranmore shortly after this and the sale to the tenants was approved by the Land Commission.