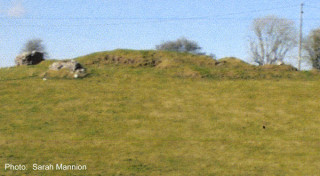 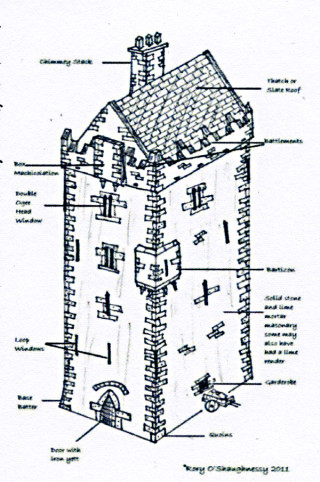 Clooncurreen Castle, a tower house similar to the one in the illustration, was erected on the elevated site straight ahead in the fifteenth or sixteenth century by a branch of the Ó Mainnín/Mannion clan. Referred to as ‘Cloyncoryn’ in an Elizabethan survey of Connacht which was carried out in 1574, the ‘gentleman’ in possession of the castle at the time was ‘Dermot Omanyn’, whom the annals inform us was afterwards slain in 1581. Diarmuid Ó Mainnín’s sons, Tadhg and Seán, are named as parties to a Brehon law agreement between two branches of the Ó Mainnín clan, drawn up in May 1584 by Baothghalach MacAodhagáin (MacEgan) at the ceremonial hilltop site of Ráth Mór in the townland of Mullaghmore West nearby.

Through sale, mortgage and forfeiture in the wake of the Nine Years War, the Ó Mainnín landholders gradually lost much of their possessions in the area. By 1617 Clooncurreen Castle was in the hands of Richard Scurlock of Ahenny in Co. Mayo, formerly sheriff of Co. Clare in 1599, and a later report suggests that it was partially destroyed by the Cromwellian forces in the mid seventeenth century. Only the grassed-over footprint of this late medieval fortified residence now remains, around which large blocks of masonry used in its construction are indiscriminately scattered. A gently rising sunken roadway with dry stone revetments afforded the occupants of the castle and their dependent followers ease of access from the southwest.