Some unusual aspects of human and animal life on our highways and byways. 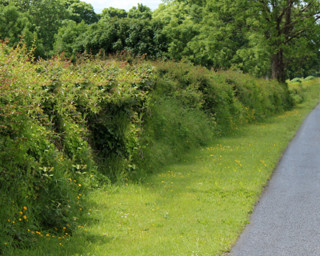 A few cows eating a lush sward of grass on the margin at the side of the road was a sight to which you would pay little heed in this district in our childhood. The herd would be unconcerned and undisturbed by the cars, tractors and lorries that might have passed them – indeed it was expected that they would be grazing away there and would give a good evenings milk as a result of the free, and probably nutritious grass on which she was grazing that day. It was not unusual for the farmer to drive them out on the roadway after morning milking and allow them meander all day on the roadside until it was time to bring them back for the evening milking. It was not always necessary to go and fetch them home, as they generally knew that it was that time of day and would return to the farm for milking themselves. They never went far and usually had their own few local roads where they would graze. All the locals knew them, some even had first names! and generally would look out for them making sure they were cared for and informing the owner, or the member of his family who might enquire about their whereabouts and where they might be found on the unusual off chance that they wandered further than usual and did not return back.

It was, and still is, an offence to graze ones animals on the side of the public road. Today it would be most dangerous to allow animals graze the roadside. The owners could be summoned to court and fined for allowing their animals to wander the roadside. In those days the local papers would be full of court case reports for animals wandering on the roads, dogs without a licence, bicycles and carts without lights, the cart without its owners name on the shafts, children missing school, after hours in the pubs, bicycles without a bell, walking on the wrong side of the road, noxious weeds and thistles growing in the land, – all major crimes of that time.

Often, this pasture was invariably of a better quality than that which grew in the local fields as all the nutrients that fell on the roads from corn on passing carts, trailers of farm yard manure, lorries transporting lime ended up in the margins. This was an important consideration at a time before artificial manure became plentiful and affordable to the masses. The animals themselves of course did their bit to maintain this fertility. We notice, nowadays, the lush grasses that grow on the road margins and banks that must be cut at least annually to prevent the view to drivers being obscured. This was not so long ago as wandering animals kept the grass verges in a manicured state. 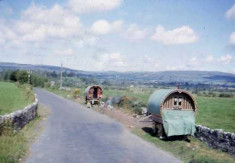 It was often a source of annoyance when a group of travellers arrived at various times of the year and set up their camp on the side of the road where there were particularly wide verges. In these parts, I remember them camped at Carrowmore near the junction to Clooncurreen and again at Ballybaun on the bend near Hutchinsons Estate. Apart from the fact that their presence and in particularly their dogs would disturb the grazing animals, they usually had a large number of horses who would, in the short time they were there, consume all the available grass for about a mile or so each side of their encampment. Even so, there were very few, if any, unpleasantries as it would only alert the Gardai to the fact that animals were regularly being grazed on those roadsides. In those days the local Gardai in Menlough travelled the roads by bicycle so it would not be often you would see them about