You are here: Home>Places>Locations>Hedge Schools

No Catholic could teach, no building could serve as a school, under penalty of law. 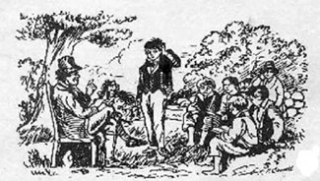 A hedge school (Irish names include scoil chois claí, scoil ghairid and scoil scairte) is the name given to an educational practice, particularly in 17th, 18th and 19th century Ireland, so called due to its rural nature. It came about as local educated men began an oral tradition of teaching the community. With the advent of the commercial world in Ireland after 1600, its peasant society saw the need for greater education. The hedge schools in Ireland were founded under the penal laws in Ireland in the 17th century. No Catholic could teach, no building could serve as a school, under penalty of law. While the “hedge school” label suggests the classes always took place outdoors (next to a hedgerow), classes were sometimes held in a house or barn. Subjects included primarily basic Irish language grammar, English and maths (the fundamental “three Rs”). In some schools the Irish bardic tradition, Latin, history and home economics were also taught. Reading was generally based on chapbooks, sold at fairs, typically with exciting stories of well-known adventurers and outlaws. Payment was generally made per subject, and brighter pupils would often compete locally with their teachers. So it began that outlawed teachers taught children and travelling “strangers” in the open air. One child might serve as a lookout for the authorities. While Catholic schools were forbidden under the Penal laws from 1723 to 1782, no hedge teachers were known to be prosecuted. Indeed, official records were made of hedge schools by census makers. The Penal laws targeted education by the main Catholic religious orders, whose wealthier establishments were occasionally confiscated. The laws aimed to force Irish Catholics of the middle classes and gentry to convert to Anglicanism if they wanted a good education in Ireland.

The Ending Of Hedge Schools:

Hedge schools declined from the foundation of the National School system by government in the 1830s. James Doyle, Bishop of Kildare and Leighlin preferred this, as the new schools would be largely under the control of his church and allow a better teaching of Catholic doctrine. He wrote to his priests in 1831:

“ The Roman Catholic bishops welcomed the rule which requires that all the teachers henceforth to be employed be provided from some Model School, with a certificate of their competency, that will aid us in a work of great difficulty, to wit, that of suppressing hedge schools, and placing youths under the direction of competent teachers, and of those only. ”

It has been found that hedge schools existed into the 1890s and that the schools had existed as much from rural poverty and a lack of resources as from religious oppression. They were used by the poor and not just by the Catholics. While the hedge schools were unfunded, the national school system set up from 1831 was ahead of school provision in England at that time. After 1900, some historians tended to emphasize the hedge schools’ classical studies (in Latin and Greek), but while these studies were sometimes taught (based on a local demand), they were not always common to every school. The teacher might get paid in butter or with a few shillings. Classes taught included Latin, Greek, Arithmetic, Reading and Writing. Originally it was all done in the Irish language. The Irish language was one thing that the authorities wanted to eradicate. As time went on, laws would allow for a school building, and the Irish actually got their own schools in the 19th century. Some hedge schools continued, but they faded from view and disappeared for the most part by the time of the famine.