You are here: Home>Places>Locations>Lime Making and Lime Kilns 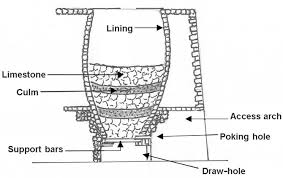 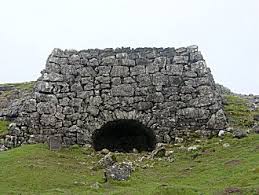 This is almost an identical replica of the Lime Kiln in Colemanstown in Smiths Estate in the 1960s. It was levelled in the late 1960's
© Killian Allen

The making of lime was quiet common on as a local event in this area many years ago. From what I have heard and read the making or “burning” of lime was almost as common as sowing the crops. Of course there was no merchant that commercially supplied lime so making ones own was common. Lime kilns were a common feature of rural landscapes throughout Ireland. Not every farm had a lime kiln but almost every village could boast of having at least one or two.

Lime kilns were chimney like structures in many cases or they were often built into the side of a mound or hill. Rocks of limestone was heated to a high temperature to produce lime. The process was known as “burning the lime” The most common type of lime kiln consisted of a bricked lined chamber with an opening at the bottom of the chamber for allowing air in to the fire, lighting the fire itself and, of course, removing the lime. It was usually constructed of locally available material. Most often stones were used in its construction and the stones were of varying sizes with small stones also being used for filling and sealing. The stones were bonded with the “daub” or Lime, gypsum, iron, and other mineral mixture that is carried up to the surface of soil by capillary action and deposited to form a natural concrete and was probably a clay bond originally.  The lime-kiln itself was a square stone building, 16 to 20 feet high and about the same width. It had an open top approached by a ramp to enable the loads of lime stone to be dropped in. The inside of the kiln was egg-shaped and it operated by gravity almost like the modern solid-fuel cooker. One wall had an arched opening at the bottom to allow the lime-burner to take out the lime. Above the opening was the floor of the kiln made of spaced iron bars to allow the lime to fall through.

Limestone was burnt in these kilns to produce the mortar used in the construction of the buildings in the area. It was also used as fertiliser and for making a lime wash to apply to the outside of houses. Coal and wood usually provided the fuel to burn the limestone but it has been known for turf to be used also.

The process began with the stones been broken into pieces about the size of a man’s fist using a sledge hammer before they were transported to the site by horse and cart. Alternative layers of fuel and stone were placed in the kiln until it was filled to the top. The fuel was ignited at the bottom of the kiln and the burning process allowed to proceed. A minimum temperature of about 900°C was required to convert the limestone to lime with the limestone reaching a bright red glow. The burning took around 4 days. “Burnt” lime would have been used primarily on the land to break up the heavy clay soil and ‘sweeten’ the grass. No chemical fertilizer was used in those days only whatever farmyard manure was available at the time.

Lime Had Many Uses:

Besides using the lime on the land which was probably the primary purpose the lime was also used for many other purposes and in many other ways. It was used as a mortar in building and in whitewashing the walls of houses and also had the effect of making the walls waterproof. Making whitewash was a simple process. one had to simply mix the lime and water. Some people used to add a “ball” of Ricketts ”blue” to make the wash even whiter and sometimes even two or three were added. I assume that that is the reason when you see some old thatched houses around the country side today that you see a cast of blue on the white walls. Springtime or summer were the usual times for whitewashing the house and out-houses and a fine day was always chosen.  The white wash was applied by brush which was often made from heather, straw, rushes or horsehair. It was also used as a “paint” inside the old houses, particularly the old thatched homes. All the furniture and crockery were moved outside if the inside of the house was being done. It was also a good disinfectant on the inside of houses, sheds and hen houses. It was also used as a snail and slug repellent, used to kill ants and cockroaches, used to disinfect cesspit’s and outdoor lavatories, used to disinfect wells, used to prevent foot rot in livestock, given as a worm drench for pigs, spread on the drills as a rooting powder for cabbage plants, diluted in water and sprinkled to deter disease on fruit trees and was given to poultry that were producing eggs to strengthen the egg-shells.

Local lime kilns ceased operating in the late 1940’s. Burnt lime for land use had now been replaced by finely ground limestone or “sludge lime“ from the Tuam Beet Factory. This has the same agricultural effects as the burnt lime and was much cheaper to produce and was delivered on site by CIE lorries.