You are here: Home>Places>Locations>Mass Paths 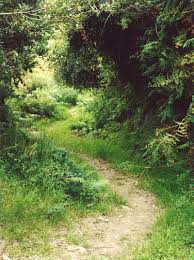 What it was like going to Mass in the 1940s, 1950s and 1960s. In those days, Mass was treated with greater reverence than it is today. It was also a great social occasion. People travelled by horse-drawn vehicles, some bicycles but the greater number travelled on foot. The crowd gathered early outside the Church. Going to Mass in Skehana you would have seen the young and old men gather each side of the main gates as you enter the Church. The horses, ponies and donkeys were tied to trees, gates and pillars up and down the roadway outside the Church. There would be lots of bicycles also outside.

Throughout rural Ireland a great number of people walked to Mass. Many of them across the fields. They travelled paths that were easily followed because the ground was worn and the stones in the stiles were made to shine by the feet of generations of Mass-goers. Those paths which are now only marked by the stiles are recognised by the State as Mass Paths. They led to most churches in rural Ireland.