Throughout the 50′ the 60’s and long before it was very valuable to have a spring well, a stream or river quiet close to a household as water had to be drawn from such sources on a daily basis to supply the needs of every household. Mondays were usually set aside as “the washing day” and copious amounts of water was required by the woman of the house to be boiled in a large pot hung over an open fire. She toiled for most of the day over a tin bath which probably rested on two chairs. This, with the additional help of a washboard and a bar of “Sunlight” soap were the tools used for washing the large amount of household clothes and textiles. Those of us that were not lucky enough to be close to a well or stream had to draw water by bucket from the Village Pump. Every village had it’s water pump which, no doubt, was also a meeting point where people met each other, shared news, updates on local events and kept each other informed of the happenings at home and abroad. Radio and television was very scarce in the communities at the time. Telephones were not widely available and the main communication was by letter. So in its own way the “parish pump” served as a water source, a meeting place and a source of the news of the day. Pumping water by hand was not easy and carrying it home in buckets was time consuming and difficult. In the winter the pumps often froze over and bundles of hay and straw used to be lit around the cast-iron body to melt the ice inside and allow the water to run again. 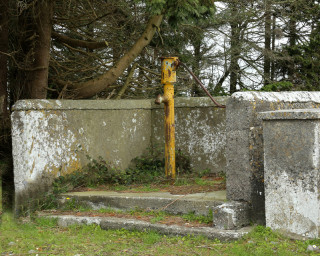 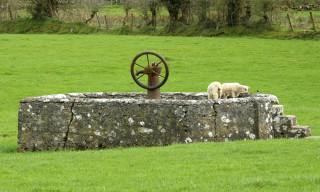 Typically the local water pump was similar to the ones above and are still to be seen in many areas of the countryside.

Sometime in the late 1960’s and continuing into the early 1970’s a group of people came together to investigate the possibility of supplying the parish of Killascobe (Menlough and Skehana) with running water. Something like this was revolutionary in that era as most families up until then had to collect water that fell from the sky by whatever means possible to supply the needs of the family and farm. Indeed today many of the young engineers leaving college and those who work in the water sector talk about, and encourage a system called “Rainwater Harvesting” to meet the needs of some of the water being used on the farm. Some people talk about it as if it was something that has been recently discovered ………… but our ancestors were successfully implementing this system for centuries without even knowing what it was called !

After much hard work, persistence and scarce resources (mainly money) the water scheme was turned on in 1974 and I’m told that the source was so bad it failed to fill the pipe network let alone the reservoir which was the first of a new design from Shay Murtage in Mullingar who had just commenced business. The result was that a new source had to be found   …….  and  …..  found fast or the whole project would be a complete disaster.

A new source was found in Menlough Beg which was a spring well, locally known at that time as “Hackett’s Well”. This went on to supply the scheme and is still in use today. At that time also, the most important thing was to get water supplied to households first and foremost. Water quality was not a priority back then as the harvested water that people were using was not of a high quality in the first place. Of course there was less ground water contamination because the type of farming in the area was less intensive. There was little or no pit silage being made, so effluent was not being emitted into ground water and slurry as we know it today was non existent.

At this point it is worth listing the people who started it all and the community at large owes a great debt of gratitude to them for their diligence, commitment, foresight and imagination at the time. It had to be a daunting, frightening and enormous task that they took on. It was a complete voluntary effort without any enumeration or compensation.

The Founding Committee were;

As the years went by and farming became more intensive and modern throughout Ireland, new houses with septic tanks were being built and traffic on our roads became heavier and larger in size our scheme suffered from the advances in modern living thus ground water became polluted and our pipe network was less able to stand the strain and weight of the traffic. In the mid 1990’s the committee of Menlough/Skehana Group Water Scheme faced one of their biggest problems since its start up in the early 70’s. The demand for water had grown considerably over the years. The distribution network was in poor shape and had many leaks which were impossible to detect as the water loss was not rising to the surface. The water quality was not meeting any of the drinking water standards that were in place at the time. There were many suggestions from finding a new source to trying to get Galway County Council to take over the scheme and integrate it into the Mid-West Scheme which bordered the area. Galway County Council agreed to allow one third of the scheme to be supplied from the public utility serving the Mountbellew area as an interim solution but this water would be needed to service other areas in the future but it was a “stop gap” temporary fix to help the scheme keep water supplied almost all of the time to the two thirds of the scheme it was still serving. Further to this, the source was an open spring well without any source protection or treatment plant so the water tests would fail on a regular basis. The scheme was on a boil notice for many years and this was set to continue into the future. 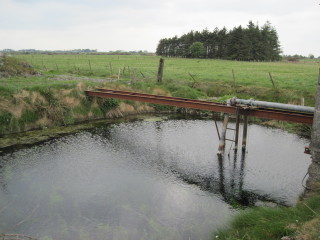 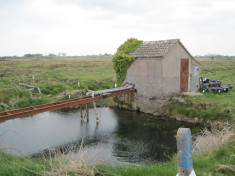 The Committee then employed a consulting engineer and after many meetings with Galway County Council the “new” concept of Design, Build & Operate was suggested as being the ideal option for the area. The Federation of Group Water Schemes came on board to advise the committee, to talk to the members and to act as an independent advisory body as there was a degree of doubt in the minds of the scheme members.  After it was decided to go ahead with the upgrade there was still an uphill struggle for the committee. Data was needed. Number of houses, number of residents, number and type of farm animals, farm sizes, pumping figures, quality of raw water, etc. The Scheme was also set up as a Co-Operative Society at this time with each member allocated a maximum of one share. There then began the work of buying the sites for the existing spring well. Up to this point it was owned by a local farmer who willingly gave the use of itself and that part of his lands to the community at no cost whatsoever. It now had become policy that all such sites must be owned by the group scheme in order to qualify for grant aid and subsidy. A new borehole site was purchased and drilled to complement the spring well. The Committee also had to source and purchase a site for a new reservoir and treatment plant. Work commenced in March of 2009 on the advance works of laying and replacing some 30Km of pipework and critical mains. Late in 2009 it became obvious that the contractor had difficulties in getting the advance works completed and we were lucky to get a replacement contractor on site immediately to complete that section of work. 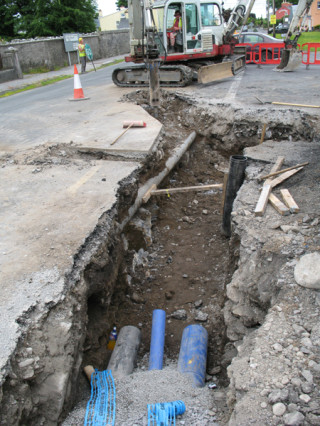 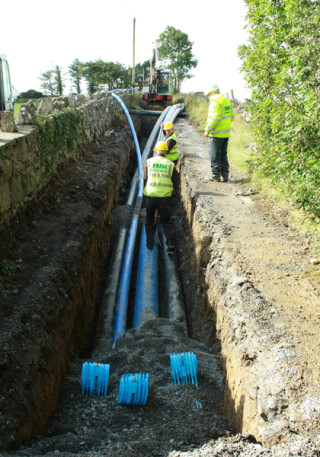 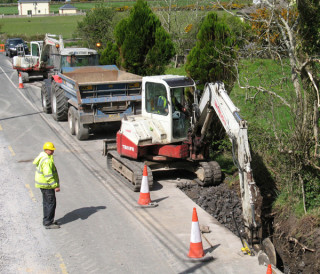 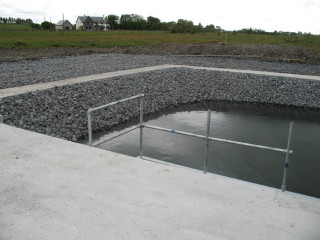 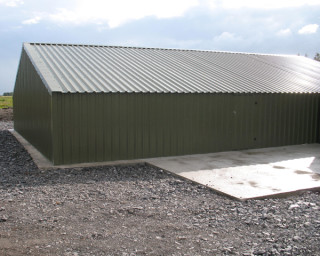 The spring well after being cleaned and protected from ground contamination with its Lightproof Shed (Photos: Gerry Costello) 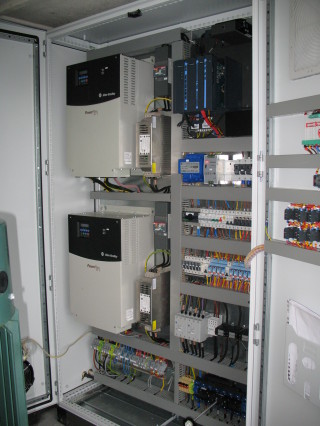 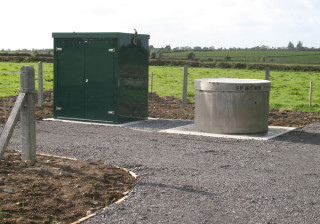 In January 2012 the upgrade project was complete and we began supplying water to the area at a standard compliant to European Drinking Water Standards and at a standard and even pressure to all homes in the area. We have gone from a daily demand of around 1750 Cubic Meters of water to less than 500 Cubic Meters of water in an average 24 hour period. We now have a state of the art treatment plant and two raw water sources providing water at a much improved quality with source protection that is second to none. 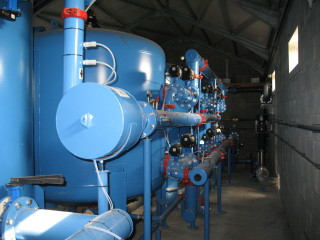 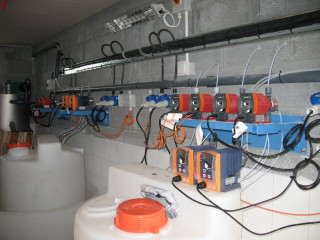 The internal workings of our treatment plant (Photos: Gerry Costello) 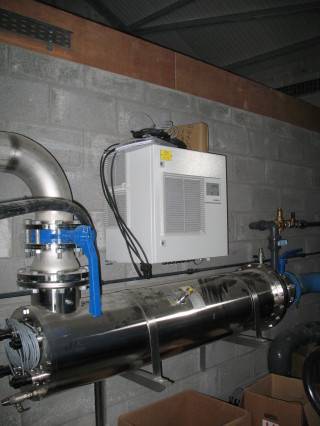 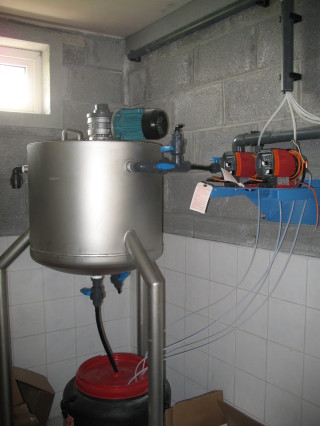 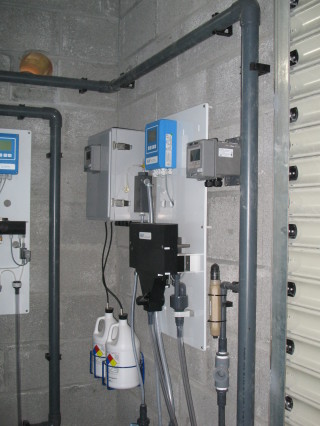 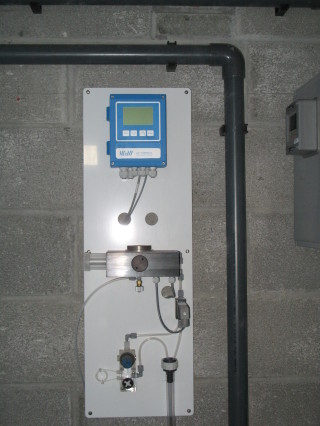