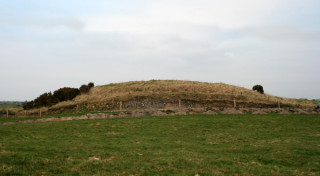 Ráth Mór ceremonial enclosure may originally have served as an inauguration and judicial assembly site for the local Sogain people during the early medieval period. However, from about AD 900 onwards, its possession and usage would have rested with the Uí Diarmada tribe, who ousted the local Síl nDoiridén and Clann Scóba branches of the Sogain from their ancestral homelands, represented in later times by the parishes of Moylough and Killoscobe, respectively. From the Uí Diarmada descended the O’Concannon clan, who later surrendered control of the area to the Anglo-Normans during the conquest of Connacht in 1235. By 1316, however, the Moylough parish area was once again in native Irish hands, this time in the possession of the O’Connor kings of Connacht, with whom it would remain until at least 1333.

About 1352, O’Kelly expansion into Ó Mainnín/Mannion clan lands in the adjacent parish of Monivea saw the capture of their stronghold at Killaclogher, the hanging of the Ó Mainnín chieftain, and their forced relocation to the parish of Killoscobe and the southern half of Moylough. Further expansion by the O’Kellys in the early sixteenth century saw them take possession of extensive tracts of land in Moylough parish, including the townland of Mullaghmore West, in which Ráth Mór is situated. Thus, when the Ó Mainnín Brehon law deed was drafted at ‘Mullach Mór’ in May 1584, the ancient assembly site was in the possession of Tadhg mac William O’Kelly, who resided at Mullaghmore Castle nearby.

The agreement, which was drawn up by Brehon lawyer Baothghalach MacAodhagáin (MacEgan), relates to a dispute between two branches of the Ó Mainnín clan over a parcel of land called Killymoylan, now Cloonmweelaun near the village of Menlough, originally Mionlach Uí Mhainnín. Remarkably, the branch of the clan in possession of the contested property agreed to surrender it, ‘not wishing that a dissension should arise between themselves and the posterity of Giolla Íosa, for they prefer having them as friends to the possession of the land.’ Furthermore, both groups agreed to assist each other in word and deed against anyone who might oppose them. The agreement was witnessed and signed (with a mark) by fourteen members of the Ó Mainnín clan, as well as by Tadhg mac William and Conor na gCearrbhach O’Kelly, in their dual capacity as Gaelic overlords and local agents of the English crown.

The Ó Mainnín deed is in essence a text book portrayal of the time-honoured role of the brehon in Gaelic society as an arbitrator rather than a judge. The ceremonial hilltop setting of Ráth Mór echoes contemporary accounts by English chroniclers such as Campion and Spenser, who depict the brehon sitting on a bank surrounded by the disputing parties as he endeavoured to broker a deal. Significantly, Ráth Mór features the vestiges of two such banks encircling the summit of the hill, upon one of which the MacEgan brehon may have sat as he drew up the Ó Mainnín agreement in 1584.

The cultural practice of assembly among medieval Gaelic peoples of Ireland involved returning to particular cult landscapes, usually of prehistoric origin, on occasions of dynastic and political meetings and for seasonal rituals. Assembly places are usually found on low hills or hill-slopes that command extensive views of the surrounding landscape. Ancestral attachment and pedigree of place were integral to the assembly practices of elites in medieval Gaelic society. The venues chosen and revisited for tribal gatherings, for conferences of kings, inaugurations and law courts, were exceptional and often long-lived places in which generations of elite gathering were experienced. However, assembly culture was not immutable. Profound political change, such as the attrition of the authority of local kings by more powerful over-kings from as early as the 8th century, the collapse of the institution of kingship and the gradual transition to lordship between the late 12th and the end of the 14th century, alongside the tendency for the boundaries of territories to shift, all influenced who attended assembly places, the sites used and the period of time over which they were frequented.

The assembly place, perhaps more than any other cultural landscape in the early medieval kingdoms and later medieval lordships of Ireland, was one of the most significant expressions of symbiosis between people and territory. It was the centre, and often the borderland where geopolitical space was demarcated and attachment to a dynastic archetype was enacted. Mullaghmore is situated on the boundary between two former túatha represented in the modern landscape by the civil parishes of Moylough and Abbeyknockmoy.  Every túath or petty kingdom, and each over-kingdom and provincial king in early medieval Ireland, had an open-air assembly place. Meetings of the early medieval túath have different names signifying their purpose – the airecht – a law court and occasion for parleys between warring parties, the oirdneadh or ríoghadh – ordination or enkinging, and the óenach – a periodic or seasonal meeting of a túath or a larger territory such as a province.  The óenach was one of the more significant meetings, held on the occasion of the quarterly feasts of the old Irish year – Imbolc, Beltaine, Lughnasa and Samhain. Each quarter of the year began with a festival at the assembly place of the túath but it is the óenach at Lughnasa about which most is known. The óenach ceased to be an institution of kingship after the 12th century. Occasions of assembly in later medieval Ireland reflect the new political reality of lordships. The characteristic meetings of later medieval lordships include the oireachtas – assembly or parliament and the gairm anma/ ord an anma – proclamation of the name or ritual of the name indicating the election of a lord or chief. The former óenach site of the patrimonial túath of a lord was often but not always carried through as the assembly place of the lordship.