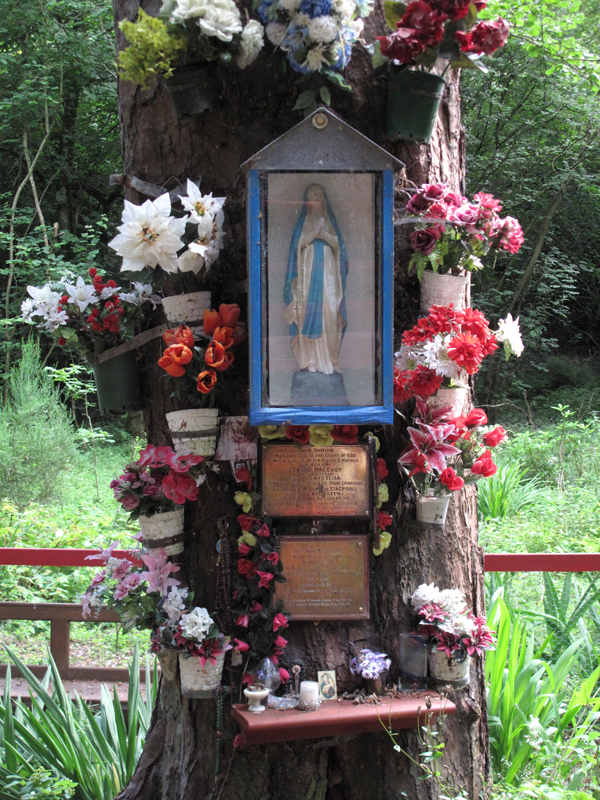 In 1868, Edward and Eliza MacEvoy erected a shrine to Our Lady of Lourdes  in a wood on their Tobertynan Estate at Rathmolyon, Co. Meath. The MacEvoy family came to the area at the beginning of the nineteenth century when Francis MacEvoy purchased Tobertynan Estate. Francis was a noted surgeon in his time and was one of the founders of the College of Surgeons in Dublin. When he died in 1808, the estate passed to his brother James and subsequently to James’ son Edward, who was MP for Meath from 1855 to 1874. Edward was born on September 5, 1826 and married Eliza Browne of Mount Hazel, Co. Galway in October 1850. It appears that although anxious to start a family, they experienced difficulty in doing so. They came in contact with a member of the Passionist Order, Fr. Charles Houben (Houban) C.P. Charles was born in Munstergeleen in Holland in 1821 and came in 1857 to the Church of Mount Argus, Dublin where he spent almost his entire ministry. His prayers were widely sought by many people, and letters arrived daily in Mount Argus seeking his help. Carriages were often sent to bring him to visit those who were sick, in their own homes. His custom was to bless his penitents and those seeking favours with a relic of Saint Paul of the Cross, who was the founder of the Passionist Order. Around that time, there was a system known as questing, whereby members of some Orders sought alms for their support, and it is more than likely that this was how the MacEvoys and Fr. Charles first became acquainted. Great cures were attributed to Fr. Charles’ prayers and it is probable that Edward and Eliza sought his intercession. After eighteen years of marriage, their baby daughter, whom they christened Pauline Mary, was born. The MacEvoys and Fr. Charles corresponded for many years and one letter written by Fr. Charles shortly after Pauline’s birth stated this good child was given to you through the intercession of St. Paul of the Cross.

In thanksgiving for the birth of their daughter, Edward and Eliza erected a shrine to Our Lady of Lourdes, on a Scots Pine tree in the woods of Tobertynan Estate in 1868 (ten years after the apparitions at Lourdes). Fr. Charles blessed the shrine, but it would appear from records at Mount Argus, that he might not have done so at the time it was erected, as he was not in Ireland then. He had been transferred to England in March 1866 and remained there until January 1874, when he returned to Dublin. It is more likely that he blessed the shrine in the years following his return from England. Fr. Charles died in 1893. In 1928, the cause to have him canonized was begun. Following a thorough examination of his life, virtues, writings and reputation for holiness, Pope John Paul II beatified him on October 16, 1988. Blessed Charles’ memorial day is celebrated on January 5, the anniversary of his death. During the homily at the beatification ceremony, the Pope spoke of Fr. Charles’ priestly ministry and of his dedicated service to others. Proof of the occurrence of two miracles will be required for canonization. Edward MacEvoy died in February 1899 and his wife, Eliza died in 1904. Their daughter Pauline married George, the 4th Duke de Stacpoole on December 1, 1883. Their son, George who married Eileen Constance Palmer of Glenlo Abbey, Co. Galway in November 1915, restored the shrine in 1939 and erected a plaque beneath. The inscription reads: 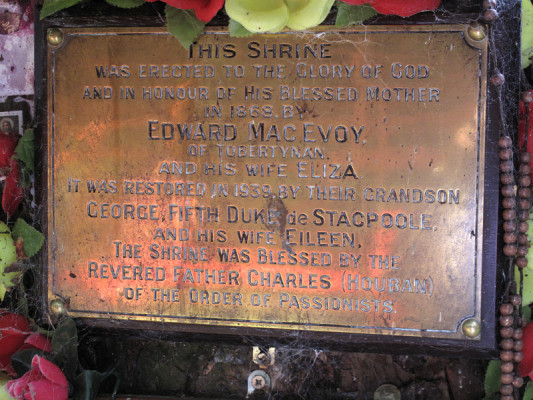 THIS SHRINE WAS ERECTED TO THE GLORY OF GOD AND IN HONOUR OF HIS BLESSED MOTHER IN 1868 BY EDWARD MAC EVOY, OF TOBERTYNAN AND HIS WIFE ELIZA.

IT WAS RESTORED IN 1939 BY THEIR GRANDSON GEORGE FIFTH DUKE de STACPOOLE, AND HIS WIFE EILEEN.

THE SHRINE WAS BLESSED BY THE REVERED FATHER CHARLES (HOUBAN) OF THE ORDER OF PASSIONISTS. 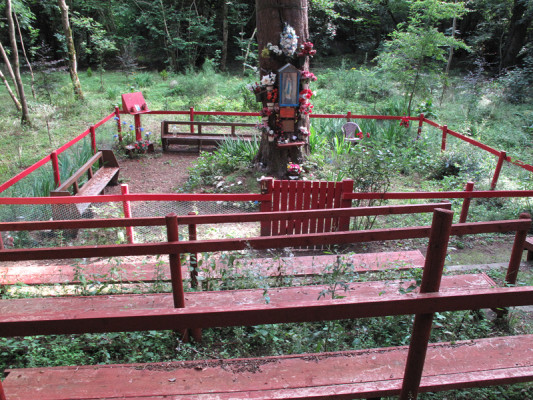 George de Stacpoole (4th Duke) died on April 3, 1929 and Pauline died on October 28, 1944. Labourers who worked on the Tobertynan Estate cared for the shrine until the 1960s, when the estate left the possession of the de Stacpoole family. Since then, local people in a voluntary capacity have taken over the task. In the early 1980s, the practice of pilgrimage to the shrine in the bluebell wood as it is known locally, on the first Sunday of May was begun and continues up to the present time. The Rosary is always recited and sometimes, Mass is celebrated. Priests from Mount Argus frequently attend and bring with them a relic of St. Paul of the Cross. In the late 1990s, the wood where the shrine is situated was sold, separate to Tobertynan House. In February 2000, the felling of some trees in this wood commenced in order to facilitate the quarrying of sand and gravel. There was huge opposition, partly because of possible danger to the shrine. When the felling commenced, many concerned people formed a human shield around the shrine in order to prevent it from being damaged.

In June 1961, Edward and Eliza MacEvoy’s grandson George donated to the Mount Argus Archives, letters sent by Fr. Charles to Eliza MacEvoy and her daughter, Pauline. The texts of three of these letters have been generously made available by the Passionist Order, Mount Argus to Dair Ríoga Local History Group for publication and are reprinted with the kind permission of the de Stacpoole family, Galway.

I beg to apologise for not having replied sooner to your kind letter; I hope you will excuse me, I have not been well lately, but I am now much better, thank God. I beg to acknowledge the receipt of the nice portrait of my dear good child Pauline. She looks like a pure angel, I am much obliged to you for having sent me her likeness; it reminds me to pray more fervently for her. As this good child whom God has given to you through the intercession of St. Paul of the Cross, I wish to tell you in few words with regard to the blessed child Pauline, who until now has preserved her Baptismal Innocence, and who is a true child of God, she is a pure object of his love, she is a saintly child, God wishes her to remain always a saint. I am sure that yourself and Mr. McEvoy and St. Paul of the Cross and myself would desire the same. Let it be your earnest prayer that the Divine Infant Jesus may infuse daily more and more his divine love into her innocent heart, and that he may enrich her with the choicest graces. I will also comply with her request by praying for her Grand Papa. I am sorry to hear that your dear niece is so ill, my prayers have been and shall be offered for her that God may visit her with his compassionate mercy, and may restore her to good health if it is pleasing to him. Do not fear, she is safe in the loving hands of her heavenly Father; May His will be always accomplished in us. I also received your last letter. I shall not forget to pray for yourself and for dear Mr. McEvoy in order that God may always direct you in all your duties according to his holy and divine will, and if the dear child Pauline would sometimes be impatient and cry then put a crucifix in her hands and say: look here, my child, what Jesus Christ has Suffered. I pray earnestly that every grace and blessing may rest upon you and your family. I beg to be most kindly remembered to dear Mr. McEvoy your dear husband and to your dear beloved child Pauline. I enclose her an Agnus Dei. May Jesus, Mary and St. Joseph and her Guardian Angel always protect her. May the blessing of Almighty God descend upon you all mentioned in this letter and remain with you forever. Amen. I remain

Yours Sincerely in Christ,

I was delighted when I received lately a letter from Brother Michael the 10th of this month, a few days previous the Saturday within the octave of Corpus Christi, asking me specially to pray for dear Pauline your dear daughter. I complied with his request and I requested some other religious to do the same. I said Mass for her on Saturday the 14th, the same morning she received her first Communion. I considered it a duty of gratitude to Mr. McEvoy and also to yourself for the great kindness and great charity you have shown to me and to Brother Michael and to our Order. Oh what great and glorious and joyful a day must it have been for dear Pauline when our dear Divine Lord gave Himself for the first time to her soul. The night before her first Communion Jesus in heaven was speaking with the angels about Pauline and on the Saturday morning the 14th when the sun rose above the hills the Heart of Jesus was glad because he knew the day was come when He would give Himself to the child. I hope that Pauline will frequently say to Jesus! I give you my heart and make it all thine own. I enclose a miraculous prayer for Pauline and I beg of her to say 3 Hail Marys for me that I may obtain a happy death. I beg to be kindly remembered to her and also to Mr. McEvoy your dear husband and also to Rev. F. Masterson and to Rev. F. Tormey. May the Sacred Heart of Jesus be a place of refuge during our life and the greatest consolation at the hour of our death. Amen. Wishing you all every blessing,

yours sincerely in Christ,

I beg to apologise for not having answered sooner to your kind letters. One Pound for the tickets arrived quite safe. I am glad to hear that you intend to join your dear aunt Lady Burke in a table and that you are working so well for the bazaar. I hope you are now restored to your usual strength. I was sorry when I heard of the great shock you received by falling from such height. I do not fail to pray for you, and for the intentions of your papa and for the intentions of your mama and with my kindest regards to them. May our good God and His Blessed Mother bless you all,

Yours sincerely in Christ,

Fr Charles Houban (Blessed Charles of Mount Argus), who was canonised St Charles in Rome in 2008