Midwife - Woman of the Knee - Handywoman 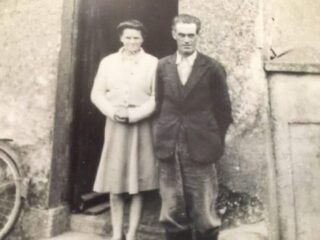 Bina born Sabina Kelly on the 22nd January 1902 Kilconnell  Co. Galway. Bina’s mother was also a midwife and she served her time in Kilconnell from 1890. Bina retired in the 1970s between them they had 80 years of delivering babies in the Kilconnell area. Bina like her mother before her educated herself in nursing and midwifery during a time when women were literally battling to be able to vote! Bina like so many of these women battled against the odds to be educated and retain their jobs even after they were married.  Bina never married but she certainly dedicated her whole life to the local women of Kilconnell during a time that was a very poor rural Ireland. She gives a great sense of community between herself and her neighbours and how they all took care of one another.

In this recording taken in November 1983 by the infamous ‘Going West’ programme by Jim Fahey from RTÉ Archives. Bina speaks about her life as a Midwife from the Big Houses to the Traveller’s camps.. She describes life of the local people and their emotions during what was often a worrying time when the woman of the house was giving birth. She describes both the sadness and the joy of a time when most births were at home.

So in the meantime enjoy this beautiful interview which was kindly sent to us by her niece Kate Noonan and Kate has also granted us permission to use the interview for the project.

I wrote this little poem about our wonderful midwive’s past & present:

An bhean ghlúine, the woman of the knee
Every birthing mother, who was over-joyed to see
Her kindness seeked by mother’s from all around
For the strength she give’s, often without a sound

A house full of face’s with joyful tears
The family celebrations would begin
For there is no greater feeling heard with that first cry or two
and then hope there isn’t a twin!

Poverty, it stank everywhere
Babies wrapped in rags for warmth
Another mouth to feed the mother said
As her other children’s face’s looked on

Night or day, come what may
In sun, rain, wind or snow
There was nothing that would ever stop Bean Glúine
To the women she would go

For the old Bean Glúine may have disappeared and gone
The time old tradition of birthing still carries on
Now transferred to maternity wards with a medical device
The gift still remains in the hands & knee’s, of our magical midwife