A wandering labourer and seasonal farmworker in Ireland 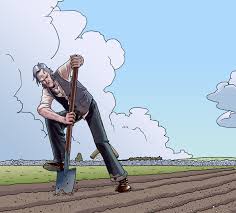 A spailpín or spailpeen or “wandering landless labourer” was an itinerant or seasonal farmworker in Ireland who travelled from village to village in the 1950s and 1960s and indeed for much longer than that. The ones that we would remember mostly came from Connamara and usualy had their houses from year to year where they would come and work at some seasonal farm job and then move on again. Conditions for such workers were very often harsh. They endured hard physical labour, low wages and maltreatment by landowners. According to the Encyclopedia of Irish History and Culture, “their numbers were greatest during the difficult years of the 1820s and 1830s. On the whole, the seasonal workers were people who had close ties to the land: small farmers, cottiers, agricultural laborers, and generally poor people with family responsibilities and no means of earning a living at home. Women began to participate as workers to an important degree only in the middle of the nineteenth century, in the Scottish potato fields. Although there were few women migrant workers before this time, women were nevertheless an essential part of the movement in other ways: they provided support for the men by traveling with them; they begged for food and money to keep themselves and their children alive until the men returned home, and they undertook and organized essential farm work back in Ireland, thereby maintaining the small holding of land as the family home”. The difficult life of the landless labourer found ample echo in the arts. An example in folk tradition of exactly how harsh life for a spailpín was can be sensed in the song; “An Spáilpín Fánach” a lament of a man who had to become a spailpín because of his family’s eviction. To avoid this terrible life, he joined the French army to fight overseas. Some spailpíní found comfort and catharsis in the arts. Several were reputed scholars, musicians and poets. To reflect the misery and hardship in their everyday lives, many of their songs and poems were laments.

Never again will I go to Cashel, Selling and trading my health,

Nor to the hiring-fair, sitting by the wall, A lounger on the roadside,

The bucks of the country coming on their horses, Asking if I’m hired,

“Oh, let’s go, the journey is long” Off goes the Spailpín Fánach.

I was left as a Spailpín Fánach, Depending on my health,

Walking the dew early in the morning, Catching all the illnesses going around,

You’ll not see a hook in my hand for harvesting, A flail or a short spade,

But the flag of France over my bed, And the pike for stabbing.

Five hundred farewells to the land of my father, And to the dear island,

And to the boys of Cualach because they never feared in the troubled times on defense,

But now that I am poor, miserable and alone, In these foreign lands,

I’m heart-broken because I got the call to be a Spailpín Fánach.

I well remember my people were at one time, Over at the bridge at Gáil,

With cattle, with sheep, with little white calves, And plenty of horses,

But it was the will of God that we were evicted, And we were left with only our health,

And what broke my heart everywhere I went, “Call here, you Spailpín Fána