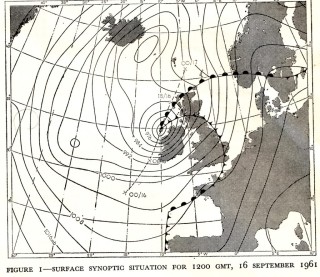 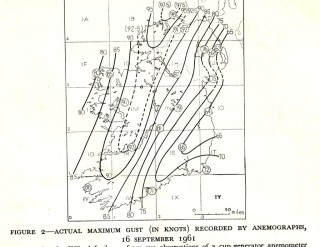 On the morning of September 16 1961, gale warnings were issued that there was a possible impending storm occurring. Hurricane Debbie was the only hurricane, that is known to have achieved hurricane status in Ireland as a Category 1 event. Violent Gusts of more than 180 kilometres an hour were recorded, and while the winds were not as strong as the gusts, they proceeded to cause a lot of damage. Twelve people died in Ireland as a result of Debbie. Tens of thousands of houses and other structures were damaged, some were completely destroyed, some suffered roof loss, while others had lesser damage such as windows blown in.

Hurricane Debbie initially formed as a storm west of Africa on the 7th September 1961 and immediately started moving westwards and intensifying and was given hurricane status on the 11th of September and quickly reached Category 3 intensity with maximum wind speeds of 195 km/h. On the 15th of September the hurricane turned northwards off Cape Verde Islands and then headed northeastwards heading towards Ireland and Europe. It first made landfall in Dooega on Achill Island, Co. Mayo off the west coast of Ireland on the 16th of September but passed back out into the Atlantic before tracking along the coast of Scotland and then Norway and finally dissipating over Russia according to Meteorological analysis. Any storm that is 64 knots and above is considered a hurricane and at the weather station on Mace Head in Carna they recorded a gust of 84 knots – which is 156km/h. The ten minute mean speed of the wind between 1pm and 2pm was measured at 65 knots or 120km/ph.

There was considerable destruction in this area as well as the rest of the country. All roadways were blocked by fallen trees. Slates and tiles were blown off roofs and the galvanised sheeting that lifted off sheds in the neighbourhood was being blown about the place like sheets of newspaper on a windy day. It was impossible to go outside as one would get struck by flying debris. Inside the house tables were upended against the windows in case the flying roof sheeting would penetrate the glass. In the distance you could hear the cracking of timber as trees were being bent to their limits by the force of the wind. Many trees that were standing alone in fields and alone on the roadsides were blown down, Needless to say all electricity in the area was out but in those days we were not as dependent on the electricity as we are today. In those days electricity was mostly used for lighting purposes at night and it would be another three months before Telefís Eireann would begin its first broadcasts. All cooking in the home was done on the open fire or on the Rayburn range. The Stanley range was also scarce around these parts in 1961.

As the winds subsided in the late afternoon the destruction everywhere was frightening. We had never witnessed anything like it before. Trees were knocked, stacks of corn and cocks of hay were scattered by the ditches and sheaves of oats and corn were strewn on the bushes and hedges. Roofs were blown off sheds and old buildings and there was debris, branches of trees, brambles, etc. strewn everywhere. Trees were still across the roads and even though it happened on a Saturday, it was the following Tuesday before the R339 at Killaclogher was open again. It was frightening to see the physical size of some of the trees that were knocked down in many fields and the amount of earth and roots that was pulled up from the ground. The locals had firewood for ages afterwards and it was not unusual to see cart loads of firewood passing by after being chopped up from some tree that became victim to Debbie. While in the scheme of things the storm did not last very long and later that afternoon weather conditions were almost normal. By evening it was all over, but for anyone who witnessed Debbie, the memory will always be with them.