You are here: Home>Topics>Events and Happenings>Local Emigration In the 1950s and 1960s 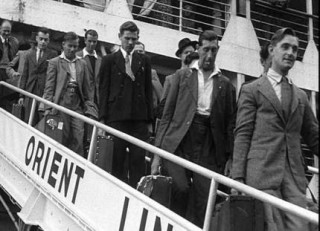 Photo: courtesy of The Irish Press

Throughout Ireland’s history, emigration was part and parcel of life and living. Even today it is both an economically enforced option for many and an option of choice that is embraced with excited anticipation by others. But in the 1950s and 1960s in rural Ireland it was the only choice for most of the children of Ireland. This was the same in Skehana and its surrounding areas and parishes. There was no industry or foreign investment in Ireland worth talking about to give employment to the masses and the farm at home in areas like ours were in need of much investment to take them into the more modern farming methods that were now being seen throughout the UK and the rest of Europe. There were a certain amount of Civil Service jobs around each year but were mostly for girls. Telephonists were also in demand but again it was a female job and when one got married they had to give up work automatically. The famous “marriage ban” was in force at the time.

For the sons in the family there were three clear choices. One of them “got the place”. Usually it was the oldest son but sometimes the one that was least educated or “did not fare too well in school” ended up as the heir. Mostly though it was the oldest son who was given the often much overrated, (and all too often way overvalued by the rest of the siblings), farm at home. For the ones left there were still three choices.

1.   They could stay at home and help on the farm for board and lodgings and maybe earn a little from casual work locally from time to time and maybe eventually get a full time job somewhere.

2.   There was the Religious Life. They could become a Monk or go on to be a priest which commanded lots of respect, power and authority in a community. It was a comfortable and fairly easy way of living – much easier than working on the run down land of Ireland or on the building sites of London. Of course it was every Irish mothers wish, in these days, to have a priest in the family and a nun would be an added bonus. It was a proud moment of fulfilment in any parents life for such events to happen, and the parents of the time deserved no less than such fulfilment for the sacrifices and difficulties they endured to achieve such moments and milestones. This area has produced it’s fair share of priests and nuns and there is nobody who can but say that each and everyone of them were a credit to their parents, their families and their community. We can only hope that they, in turn, have been treated with the dignity, respect and gratitude that they all truly deserve for their lives of sacrifice and dedication.

3   The other option was the “boat to England”. This option was probably a mixture of happy anticipation for a brighter future and a dark sadness and heavy heart to be leaving behind family and friends some of whom would be long gone before they would set foot on Irish soil again.