You are here: Home>Topics>Events and Happenings>The Murder of young Mr Bellew

The Murder of young Mr Bellew

Taken from a highly informative book written by Skeffington Gibbon which gives a great insight to life in rural Ireland West in the late 1700's and early 1800's.

The following is an account of the murder of young Mr Bellew with Mountbellew connections at the Great Fair in Ballinasloe. This extract is taken from the book “The Recollections of Skeffington Gibbon, from 1796 to 1829”. I quote direct from the text as written; 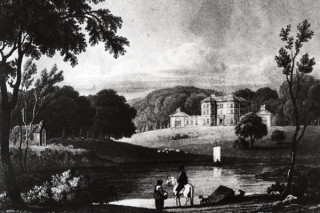 ” ………….  Children, said my father, of the many revolting massacres committed in this and the adjoining counties within a few years back, I do not recollect any of them so heinous as the horrible murder committed  on the body of young Mr Bellew, at the great fair of Ballinasloe, and the chief of the gang his own domestics and dependents. Mr Bellew was respectably connected in the County of Galway, being lineally descended from Earl Bellew, as also allied to the house of Mount-Bellew, one of the first Catholic families in that county. He lived with his father, (as single gentlemen do in this kingdom,)  at a beautiful seat, now in ruin, called Drum-House, on the road leading from the village of Creggs, on the Burke manors, to the Town of Tuam, a Bishop’s See, both in that county. Young Bellew unfortunately accompanied his father to this celebrated meeting , well known as the October Fair. I think it was 1786. Mr Bellew got a large sum of money for fat cattle the two days of this meeting which his own cotters and the stable men of his household saw him making up  in the inn where he stopped, and which money they thought the young son retained in his possession; consequently, a gang (about nine) of those fellows planned a scheme to induce the young gentleman to come to the stable where he kept his horses, about nine o’clock in the evening, saying that they would have a fascinating young woman to meet him. To this he agreed; and to jog his memory, an infamous villain of the name Greaghan, his own stable-boy or helper, came at the appointed hour, and sent word up by the waiter that he was below stairs, and wished to see his young master. On Mr Bellew receiving the message, he desired the waiter to order the man his dinner, which was accordingly obeyed. When the dinner was laid before the monster, who was bursting, like Judas, with evil thoughts, the maid who served him went in search of a knife and fork, sometimes scarce articles at this great fair; however, to her surprise, on her return, though only about a minute absent, Greaghan had the meat cut on his plate with a large knife commonly called a jack knife, and with which he murdered Mr Bellew in a few minutes afterwards.  Young Bellew had asked his father’s permission to go and see the curious scenes at such large meetings, which gentlemen about his age (not more than twenty one), are generally anxious to view. His father reluctantly complied, but not until one or two gentlemen who dined with them, and were enjoying themselves at their wine, interfered, by which the unfortunate young man was allowed to go out for a short time. He asked his father for some pocket money; to which he complied in no pleasing terms, and threw him a purse across the table, containing some silver and sixty guineas in gold. On leaving the inn, Greaghan met him at the door, and conducted him to a lonely stable in a remote lane, within a few paces of the great River Suck, which moves in all its magnitude through part of this town, and empties its copious influx into the noble Shannon, about four miles from Dunlow, commonly called Ballinasloe, where the unfortunate Mr Bellew entered this horrible den. He was conducted to a dark corner, in which one of these demons, named Cusack, was seated on a bundle of straw, dressed in woman’s clothes. This villain (Cusack) was selected  from the other gang to personate a female, in consequence of his feminine appearance, having no beard, being of fair complexion, and particularly as Mr Bellew had no knowledge of his exterior. Mt Bellew advanced towards the young lady, as he thought , to embrace her and put his hands around her person; but the reception he met for his caresses was a mortal stab of a large knife in his abdomen. He screamed, and called upon Greaghan to come to his aid; but the assistance he met with was the whole gang coming and stabbing him in various parts of the body.  As he lay prostrate on the floor, even when dead, a young man, who happened to come into the stable at the moment, was obliged to give him three stabs, and to take his oath that he would never divulge the secret. They rolled the body in some hay, tied it up in a sheet, and threw it into the River Suck.

Amongst the murderers was a farmer’s son of the name of Lyons, from the village of Croswells, on the Caulfield estate near Donamore. Lyons was the only son, and what I may call a spoiled child, of respectable and industrious parents far above want, and how he could bring himself to be guilty of so atrocious and sanguinary an action, and to join such a group, who had no stake or dependence in the country, save the general lot of those serfs and peasants who possess no other means but their scanty earning from one meal to another – their residence a filthy, smoky hut, their companions a pig, a cat, and a half starved mangy dog – some may have a cow, a goat or an ass, which is driven from the wretched abode of its nominal owner, (as it generally happens that the latter is more indebted to the rackrenter or landlord than the animal is worth,) to some barren moor or noxious marsh, apparently sinking as a swamp ready to swallow in its stagnated mire the skeleton, which, from its craving maw and the pangs of hunger, is obliged (not that anything delicious is in the soil) to feed on its unwholesome weeds. I don’t impute to the oppressed peasant  or rustic that these miseries are solely caused by his not reading estracts from the New Testament; far from it, they spontaneously grow with his growth: he is born in poverty – to comfort he is a stranger; and, inundated in want and wretchedness, he closes his eyes in the arms of death upon a world that afforded him no other soothing consolation but all the pangs and horror that middlemen, rackrenters, rapacious tithe proctors, and the unceasing demands of the voluptuous absentee, can inflict upon a well disposed people.  To these misfortunes the unfortunate Lyons was a stranger, as his parents were in comfortable circumstances, and possessed that state of mediocrity that they neither felt the pangs of keen distress nor the sudden surplus of overgrown wealth. The whole of this infamous gang who murdered the much and justly-lamented Mr Bellew were executed in the town of Galway, and their bodies hung in chains in the town of Ballinasloe for many months afterwards.    ……………..”

To read the complete book, just click on the cover page below: 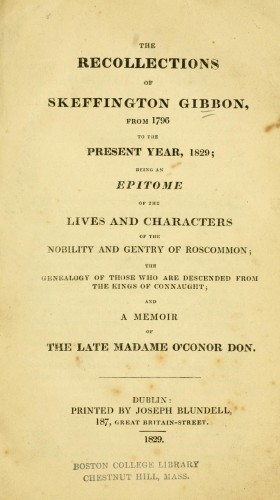