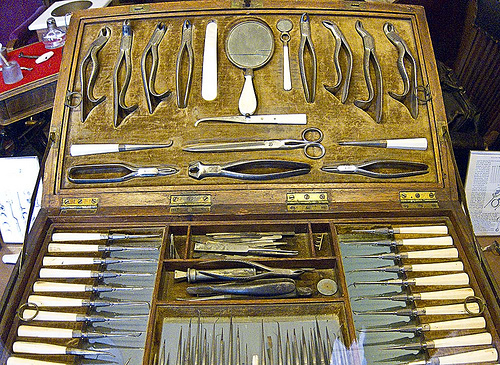 By the end of the 19th century dental health appears to have been worse than at the beginning of that century. Life style had led to less consumption of fresh foods, and there had been a huge rise in the amount of sugar eaten – a five times increase. By the time of 1902 6% of recruits to the British army were being rejected due to “loss or decay of many teeth”. It was a similar story amongst children. In the 1890s the Dental Authority, such that it was, asked its members to help investigate the condition of children’s teeth. This was the first time a nationwide survey had been undertaken and was the beginning of the interest in paediatric dentistry. In order to reflect all society children across different social classes were examined. Poorer children could not afford any dental care although they tended to eat coarse food rather than more acid producing foods which led to decay. Wealthier children from the middle and upper classes could choose from a number of items for cleaning their teeth and mouths. Such products were not without their problems. The bristles of toothbrushes were made from hollow animal hairs which trapped germs. This was made worse if the family shared the brush, known as ”cross-infection‟. The same was true for the pots of toothpaste. The ingredients in the toothpaste were hazardous too. They included charcoal and brick dust as abrasives to remove plaque. In fact these ingredients were probably too harsh. Wealthier children could afford a visit to a dentist. By the turn of the century surgeries had moved away from an adapted front room with ordinary household furniture to a dedicated surgery with specialist dental furniture although not all surgeries could take advantage of this technology as many did not have access to electricity. 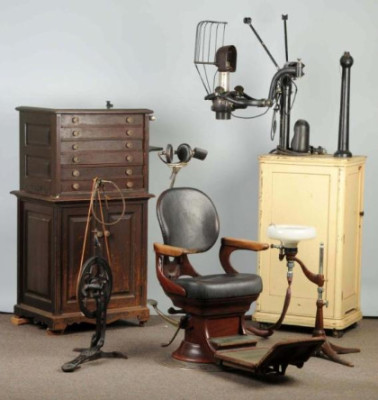 Others could not afford the latest technology such as X-ray machines. There were not enough dentists to meet everybodys needs however (even if everybody could have afforded to pay, was brave enough to attend or understood the benefits). There was about one dentist for every eight and half thousand people. The poorer sections of society had to treat themselves with home cures for toothache, such as chewing on a clove. Some of the poor in a few major cities were able to visit dental dispensaries. If the pain was too extreme and an extraction was needed they might visit the local doctor if they could afford it or a cheaper option was to visit the local blacksmith or butcher.

The wealthier classes might have been able to afford a dentist but they were not assured of an excellent service. Many dentists were unqualified. The first dental schools had been opened in the late 1850s and qualification and registration had become compulsory in 1879. However there was a loop hole in the law. This allowed unqualified persons to practise dentistry as long as they carefully avoided the use of the word “dentist‟. Some of these trained with an older dentist and would have been skilled but others were pure charlatans. Anybody could place an advert offering dental services. Much of their work though focused on one aspect of dentistry – Extraction.

Problems in The Profession: 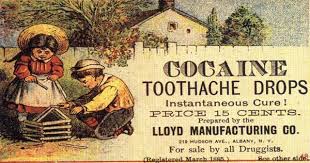 At the time, the dental profession was marred by problems. One of the biggest challenges was the necessity to raise the status of the profession, which was held in poor regard at the time. Dentists were encouraged to “strive to attain the highest standard of dentistry. Be it the most expensive form of restoration, or the most moderate, he or she should never deviate from the highest idea, and give their best”. With World War II having only ended the previous year, many Irish dentists were involved in the Army Dental Service in the 1940s. The salary received by these dental surgeons had fallen considerably between 1938 and 1946. It was reported that the terms and conditions offered to young dentists in the Irish army were “a disgrace to any army in any country”. The IDA urged all young graduates to boycott the Army Dental Service. By November 1946, the IDA had received a promise from the Minister for Defence, Oscar Traynor, that the Government would put new, improved conditions of pay and promotion for army dental surgeons in place. The National Health Insurance Society (NHIS) Scheme also proved to be a huge bone of contention in the 1940s, as dentists complained that the scheme was inequitable. In an article, dental surgeon Dr J. McCloskey criticised the scheme for not supplying a reasonable fee for the various dental treatments required: “To say the least of it, the attitude of the Society [NHIS], to my mind at any rate, is most unfair. When one considers the benefits to health derived from dental treatment, it causes one to pause and think. What are the benefits that arise as a consequence of such treatment?” “Insured members are more healthy, there is less loss of time to an employer through illness, with a subsequent improvement to the industry of the state… Yet the NHIS quibble about granting decent fees to the dentists for performing this wonderful work.”

Fluoridation became a recurring subject. Studies on the fluoridation of water in the United States were fielding positive results in terms of reducing the number of caries in residents. One report said: “Fluoridation is an awkwardsounding word, but in places where it has been introduced, dental decay has been cut down by about two-thirds among young people. The whole idea is to start protecting the children’s teeth when they are young”. As the 1950s wore on, dentists increased their call for fluoridated water to be introduced in Ireland. In 1956, the Irish Government agreed to introduce the scheme, and it finally came into effect in 1964.

The promotion of preventive dentistry continued in the 1960s. A 1966 report from Chief of the Dental Corps in the US army, Dr Joseph L. Bernier, gave advice on the importance of preventive dentistry. In this report he said: “Among the greatest difficulties experienced in attempting to promote preventive practice, of the type and to the extent now possible, have been those of revising deep-seated attitudes and of over-coming skepticism of members of the profession conscientiously committed to the concepts of repair and cure”.

By 1970, A number of studies had been carried out on how the fluoridation scheme was progressing in Ireland, with the Naas-Athy six-year molar fluoridation study at the forefront. The study was carried out by F.M. O’Carroll, B. Flanigan and J. Kehoe, and intended to track and report any benefits shown in first permanent molar teeth due to the fluoridation of water supplies. During the course of the study, the following results were observed: “It is rather evident that fluoridation exerts its most striking benefits in instances where amelogenesis is in progress. The age seven group were exposed to fluorine at two years of age, which was prior to completion of amelogenesis”. However, although people were already reaping the benefits of fluoridation, problems began to arise with the scheme. In 1974, the availability of fluoride supplies became an issue, which took the Department of Health two years to rectify. Dentists were also unhappy with fluorine concentrations, with many tests showing that the levels in water were too low. In a report published in 1976, a call was made for the establishment of an official agency to monitor and direct the fluoridation of piped water supplies in the country. Fluoridation remained a hotly discussed topic throughout the rest of the 20th century, and even to this day.

The Social Welfare Dental Benefit Scheme was causing the most concern in the dentistry profession in 1980. The IDA felt that the fees being paid to dentists under the scheme were too low. In 1974, the limits for eligibility for social welfare benefits were removed, meaning all employees were now entitled to the scheme. As a result, an entirely new category of patients was created. The IDA demanded that the Department of Health reform the scheme. The Government eventually gave in to two of their requests. These were: the introduction of a fee for examination and general consultation; and changes in the scale of fees for extraction. Alterations were later made to the Public Dental Service, which in a letter in 1990, Dr Dermot Healy said amounted to “one of the most serious challenges” to face the dental profession to date. The challenge to which he was referring, was the introduction of a scheme of relative value units to measure dental clinical output. Dr Healy criticised this change, saying: “The scheme fails to take into account the quality of care being provided. It ignores health promotion and prevention. It will encourage referral to secondary care. It fails to recognise the fact that for many of our patients, it is their first attendance at a dental surgery. Thus, there are many incentives and disincentives within the scheme, which would not be conducive to the delivery of a caring and effective Public Dental Service”.

“Dentistry, even now, is going through a transition. As we see, the range of dental services and the mix of dental practice employees have changed dramatically during the past half century. We also are experiencing a major shift in the number of dental care providers.”