You are here: Home>Topics>Items and Things of Interest>The Sugar Beet Campaign

It was necessary to thin the beets. One person would block with the hoe, and the next person would crawl behind and from the clump pull out all beets except one. 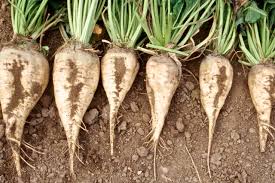 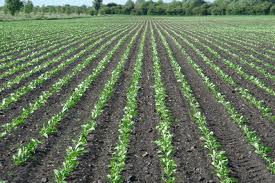 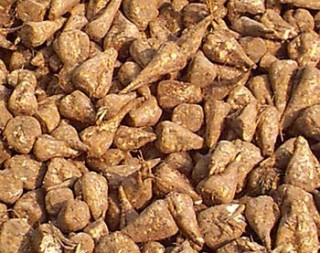 Sugar beets were a family farm crop for many years during the 1960s and 1970 in this area, and through the years since there have been many changes in their planting, thinning and harvesting. The first sugar beet seeds literally exploded when planted, causing one seed to produce up to 15 little beet plants. Since there should be only one beet in about 10 to 12 inches of space, it was necessary to thin the beets. One person would block with the hoe, and the next person would crawl behind and from the clump pull out all beets except one. This, of course, was a very tedious job that required many hours of work. In time, through experimentation, a segmented seed was developed, preventing so many beets from developing from one seed.  Nowadays they have what is called a mono-germ sugar beet seed. This means that only one plant comes up from one seed. Now the sugar beets are space planted, and the hand labor of thinning beets is completely eliminated. When the farmer plants the beet seed, he also sprays herbicides in an eight- to l0-inch band on the beet row. In ideal weather conditions, the spray literally eliminates all weeds from coming up in the sugar beet row, again saving the hand labour of weeding the beets with a hoe.

However, in the early days the beets needed to be cultivated several times during the growing season to prevent the weeds from growing between the rows, which could literally choke the growing sugar beet. Ideally, the beets were planted in early April, but there were times when weather did not permit the farmer to do any planting until late May. Beets were harvested by hand, but in the early ’40s, a mechanical beet harvester that was pulled by a tractor appeared on the scene. This harvested one or two rows of beets at one time. Defoliators, which beat the leaves off the beets before the harvester came along and lifted the beets out of the ground, were also invented. I never saw such a machine locally. Around these parts beets were pulled by hand, laid out in rows and crowned (The green foliage was chopped off using a beet knife – A sort of a machete). The beets were then gathered and piled on the roadside awaiting collection by the CIE lorry to be transported to the factory in Tuam.

A good sugar beet yield was 25 tons of beets per acre, with a sugar content of 17-18 percent per acre. When the sugar beets were taken to the Tuam factory, the loaded truck is weighed, then proceeds to a beet piler. About five beets were taken from various parts of the truckload, and these were tested for sugar content. The beets were then unloaded from the truck, the dirt that had been shaken from the beets was loaded onto the CIE truck, and he again crossed the scales. The weight of the empty truck was then deducted from the weight of the full truck, and the remaining number was the actual tons of beets that were brought in on that truck.

When the beets reached the processing plant, they were washed, sliced, and placed in a very large cooker. After the appropriate length of cooking time, they went into a spinning process whereby the sugar was spun away from the beet pulp and came out of the cooker as fine grains of white sugar. Besides granulated white sugar, there were also sugar beet by-products, namely beet pulp and molasses. These by-products were utilized as cattle feed. The sugar beet campaign started in October when the first loads of beets arrive at the factory, and lasted until the very last beet has been taken from the very last pile-usually in February. At the time There were four sugar factories in Ireland, one in Mallow, one in Carlow, one in Thurles and the one that served this area and the local growers in these parts was located in Tuam.