You are here: Home>Topics>Items and Things of Interest>The Thresher and its history in this area.

The Thresher and its history in this area.

The story of Peter Hardiman, Doonaun, and his thresher. 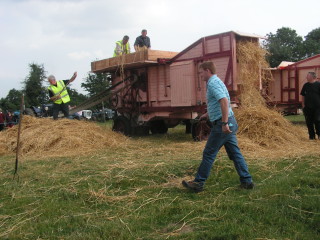 The thresher at work. 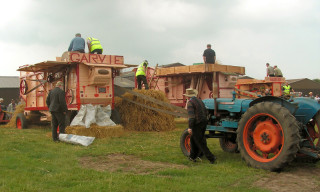 The thrashing machine, (or simply thresher), was first invented by Scottish Mechanical Engineer Andrew Meikle for use in agriculture. It was devised, around 1786, for the separation of grain from stalks. For thousands of years, grain was separated by hand with flails and was very laborious and time consuming, taking about one-quarter of agricultural labour by the 18th century. Mechanization of this process took much of the drudgery out of farm labour.

Early threshing machines were hand-fed and horse-powered. They were small by today’s standards and were about the size of an upright piano. Later machines were steam-powered, driven by a portable engine or traction engine. In 1834, John Avery and Hiram Abial Pitts devised significant improvements to a machine that automatically threshes and separates grain from chaff, freeing farmers from a slow and laborious process. Avery and Pitts were granted United States patent #542 on December 29, 1837.

“Since the invention of this machine, Mr. Meikle and others have progressively introduced a variety of improvements, all tending to simplify the labour, and to augment the quantity of the work performed. When first erected, though the grain was equally well separated from the straw, yet as the whole of the straw, chaff, and grain, was indiscriminately thrown into a confused heap, the work could only with propriety be considered as half executed. By the addition of rakes, or shakers, and two pairs of fanners, all driven by the same machinery, the different processes of thrashing, shaking, and winnowing are now all at once performed, and the grain immediately prepared for the public market. The expense of horse labour, from the increased value of the animal and the charge of his keeping, being an object of great importance, it is recommended that, upon all sizable farms, that is to say, where two hundred acres or upwards, of grain are sown, the machine should be worked by wind, unless where local circumstances afford the conveniency of water. Where coals are plenty and cheap, steam may be advantageously used for working the machine.”

Steam-powered machines used belts connected to a traction engine, often both engine and thresher belonged to a contractor who toured the farms of a district. Steam remained a viable commercial option until the early post World War II years. Tractor Vaporizing Oil (TVO) was the fuel widely used until the 1970s and later diesel became the fuel of choice for the more powerful tractors.

Peter Hardiman and the Thresher

A fascination with machinery seems to run in the Hardiman blood!  In the 1960s at the “road gate” of the Conneely/Keary/Hardiman farm in Doonane, a green fuel tank was perched beside the pillar on the high wall.  The 250 yards of a narrow boreen to the thatched house, with its three gates to open and close, would have been quite an obstacle course for the Esso driver as he refilled the tank!

The talk of ‘engines’ even invaded the female psyche in the family where we were surrounded with talk about such matters.  Hours of conversations seem to revolve around the attributes or opposite of various makes and models of tractors and engines.  We all grew up with the words crankshafts, pistons, spark plugs, fan belts, dexta manifolds, filters, radiators – not to mention an array of tools and handles and contraptions to aid in the ever changing world of farm machinery.  The interest remains to this day with Liam and his son Peter having a great interest in engines, cars and old Honda 50’s, even a doll from Santa didn’t escape and was left out one night – to be found the following morning without her lovely mane of dark hair – burned off by the dripping diesel!

In 1948 Peter Hardiman purchased a rubber tyre tractor and Garvie Mill with a 30” drum for 550 pounds in Ruane’s of Athenry.  The Garvie originated in Scotland. The threshing season lasted from September to April.  The large cocks of corn were usually constructed in the haggard of every farm.  There was a ‘Meitheal’ (group of workers) in every village which showed up whenever the thresher was approaching.  The person who owned the tractor and mill also had various people working with him from time to time and Peter Hardiman had Jackie Gilligan of Doonane, Willie Watts of Ryehill, Jack Kilgannon of Guilka and a young PJ Hardiman of Clough among others. Six to eight helpers were needed on the day of a threshing, two forking the sheaves up from the cocks of corn, two men on top of the thresher cutting bands and feeding the sheaves into the drum, two men making a cock of new straw falling from the machine, two men pulling the bags full of the seed out and replacing with new bags and carrying the heavy bags to the barn.  The chaff had to be continually cleared from underneath and this required constant attention.

The thresher emitted a lovely humming sound which my mother Nonie often commented on.  It was a sound that heralded a contentment with the coming of Autumn – as described in John Keat’s lovely Poem “Autumn –  the season of mists and mellow fruitfulness”.  It was the end of the season of growing and harvesting.  The machine spurted out new straw at one end, seed into bags at the other end and waste chaff underneath. The wooden shakers, or chairs to us children, moved up and down to aid the exit of the straw. The wooden machine was painted a pink colour with red accents along the length and uprights of the construction.  The part of the operation that women and children didn’t particularly like was the presence of mice or rats in the haggard when the cocks of corn were disturbed and the fear that a mouse would be carried in a pocket into the house!  Pitch forks were on hand and the family dog and cat were kept busy on such days.

Peter operated in an area from Gurteen to Clonkeagh, Clough to Guilka, Menlough, Vermount, Clooncurreen, Skehana, Ryehill, and other areas. The price per stack of corn was 7/6 (7 shillings and 6 pence).  A very large stack was 1 pound. PJ Hardiman, Fairhill, a nephew of Peter, relates that he was paid 3 pounds a week for 6 days threshing and it was money much appreciated in those times.  The thresher would normally thresh up to five or six stacks in a day providing there were no problems of belts being snapped or tractor breaking down. When the work in the haggard was completed the men eagerly looked forward to the tea in the kitchen of every house.  The refreshments usually consisted of boiled eggs, homemade brown bread or loaf bread, jam of mixed fruit or ‘thresher’s jam’ as it was called was always a popular choice.  Currant cake was sometimes a treat and several cups of tea were served.

Threshing at Smith’s Farm, Colemanstown was a big day of threshing and Peter was glad to have this prestigious job.  The Smith’s were a well respected family in the area and had moved from Cavan to take over the Quaker Model farm.  The threshing took a whole day at least.  It was the only house where a full dinner was served to the men by Mrs. Smith and her family.

It was a known fact that some customers paid immediately, some paid later and a few never paid for the service of the thresher.  Peter was patient but on occasions he would have to call to a house and ask for payment.  A story is told by Pat Flynn, Menlough that, Pat and his brother, were given the money by their father to pay for the threshing. Instead, the two young men spent the money on dancing and other pursuits.  When they met Peter they told him what had happened. Peter’s discretion was forever remembered and their father never found out but Peter got paid in full.

The End of an Era

In the 1960s the arrival of the combine harvester carried out the work of all the various functions of the old threshing mill in one single operation.  It reaped and threshed the corn in one sweep and in much less time. The old style threshing business gradually came to an end.  Peter sold the Garvie Mill to Pake Rourke of Brierfield in the early 1960s and Pake, along with his brother Ben, continued to operate that thresher in their locality for many years afterwards.

In keeping with his love of machinery Peter owned a black Ford 8 car (Reg plate IZ 3988) which he bought from a builder in Roscommon for around £70.  Looking at the black and white photographs taken in the 1950s the car now looks very exotic with its high step up to the doors and the wheel attached to the rear and the large mudguards.  With his new wife Nonie Keary, he travelled to Kerry and Dublin in May 1953 on their honeymoon without any known breakdowns – although there is a story that the car broke down at Moneenageisha the day before the wedding and the wedding cake was in the back seat!

In the off season of threshing Peter operated mowing machines and tractor drawn ploughs.  Popular makes were the Cockshutt iron-wheeled tractor, later the Fordson Major, Massey Ferguson, Bamford mower and other models.  Comparing and discussing the various makes and models and the difficulties of fixing or repairing the machines were the subject of intense conversations when men gathered to chat. Long journeys were made to buy machinery.  Once Peter and Andy Killeen of Colemanstown travelled to Athlone and Peter drove the newly acquired tractor home with no lights on a dark night!  In another instance Peter and PJ Hardiman cycled to Moycullen to see a tractor they had seen advertised for sale.  To their huge disappointment they found an unsatisfactory blue-painted machine not fit for purpose.

The slower pace of the older machinery in cutting hay or corn left time to be aware of the surroundings.  A nest of pheasants would often be uncovered.  It was also the era of the corncrake – now sadly disappeared from this area and currently being preserved along the callows at the Shannon.  Peter often brought the pheasants home to our delight and we tried in vain to rear them like chickens!  The arrival of modern machinery in the 1970s can be lamented in some ways.  The attention to detail was replaced by a speed to get the job over and done in a quick turn around the field and the neatness of cutting the headlands with a scythe disappeared.  The roaring of the rotary mowers replaced the humming of the older more gentle machinery.  The era of high-tech machinery had truly arrived.

Following the end of the threshing business, Peter worked  at Johnny Burke’s in Newcastle as a lorry driver, he then drove milk to the creamery for Greaney’s in Ballygreaney, Ballymacward, and worked in Corbett’s Hardware store and yard in Athenry as a driver while helping out on the family farm with his parents-in-law Willie and Nora Keary, wife Nonie and children – all of whom took part in the various farm tasks.  It was a big treat for us children to go in the creamery lorry for a day for ‘the spin’ to areas as far away as Corofin! In later years he worked fulltime on the mixed farm but Peter will be most fondly remembered and associated with his many years of work with the thresher.

(Written by Peter’s daughter, Marian, with much thanks and appreciation to P.J. Hardiman, Fairhill, for his help in the compilation of this article).