The Tradition of Pancake Tuesday

The day of the annual pancake feast 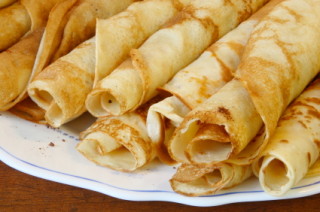 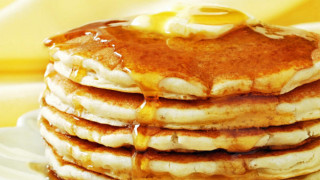 Shrove Tuesday, the day before Ash Wednesday is more commonly known as Pancake Tuesday. It is the annual pancake feast. This night before the start of the Lenten fast is a time when many still engage in the archaic practice of making, tossing and eating mountains of pancakes.  Generally, large, thick pancakes are simply sprinkled with lemon juice and sugar and sometimes thick, sweet syrup, rolled into a cigar shape and eaten as a sweet. The survival of this old custom is interesting, since the rigorous Lenten fast is not as widely observed or as ridged  as it once was, though a fair number of people still abstain from alcohol, cigarettes and sweets for Lent. Shrove Tuesday, however, is as popular as ever. The ritual is linked to the great European carnival tradition of Mardi Gras (“Fat Tuesday”) when people ate as much fat and meat as possible, knowing that these were forbidden for the next forty days. From the early Middle Ages, the Catholic Church forbade the consumption of meat, eggs and dairy produce during Lent. On Shrove Tuesday, thrifty housewives made use of the perishable eggs, milk and butter in the preparation of pancakes.

Like many other European holidays, the pancake day was originally a pagan holiday. Before the Christian era, the Slavs believed that the change of seasons was a struggle between Jarilo, the god of vegetation, fertility and springtime, and the evil spirits of cold and darkness. People believed that they had to help Jarilo fight against winter and bring in the spring. The most important part of Shrovetide week (the whole celebration of the arrival of spring lasted one week) was making and eating pancakes. The hot, round pancakes symbolized the sun. The Slavs believed that by eating pancakes, they got the power, light and warmth of the sun. The first pancake was usually put on a window for the spirits of the ancestors. On the last day of Shrovetide week some pancakes and other food were burnt in a bonfire as a sacrifice to the pagan gods.

One social aspect of the night, however, has fallen into disuse – the link between Shrove Tuesday and the romantic fortunes of the unmarried. Traditionally in Ireland, marriage was forbidden to take place during Lent, so in the weeks before Christmas and “Shrovetide,” as it’s sometimes called, matchmakers busily tried to find suitable candidates for marriage before Ash Wednesday arrived. Households left with unmarried daughters on Shrove Tuesday tried to imbue them with better luck for the coming year by allowing them to toss the first cake. Their pancake-making skills, for better or worse, were seen as an indication of their romantic chances for the next year.