Knitting was a local pass time for many women and a cottage industry for others. 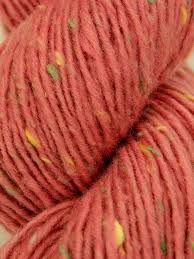 In the 1960s every housewife in the village spent their “leisure time” knitting. It was jumpers, cardigans, socks, gloves, caps, scarves and sweaters for themselves, their children, their husbands and even for the odd neighbour who was not as handy with the needles. It was a winter activity which they could do sitting beside the fire, holding a full conversation with all who were there and continue on knitting without thinking or – horror of all horrors – without “dropping a stitch”. There were many patterns and many stitch types but the ones that stand out in my mind are “plain and plural”. All young girls attending national school used to have “sewing and knitting” classes in these times also. It seemed that all local girls were able to knit quiet competently by the time they left national school. It was a fantastic skill to have at that age and in that time in Ireland. Some girls even made it a cottage industry and were supplied by the wool (knitting thread) from places like “O’Maille’s” in Galway and knitted Aran Swetters for a fee. It was a small cottage industry and when one realizes that in those days it was not unusual for girls who finished national school not to go into the workplace as jobs were scarce and to stay at home and just help on the farm until they got left home to get married. So it was great to have some income to sustain themselves with.

I can well remember once hearing a few girls discussing “last nights dance” and hearing one of them describe a dance proposal she received on the night in question. She said “He was sweatin’ like a horse and He was droolin at the mouth and when he opened it all that came out were teeth ……. and not a good one in the lot of them. He asked me to dance and when I said “not now” he said “did you bring your knittin’ with you luv”.