Popular Lenten activity in the 1960s. 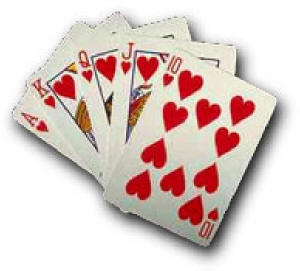 A regular event in Menlough hall in the later part of the 1960s was the Whist Drive. A whist drive is a social event at which progressive games of whist are played. This used to take place on some Sunday nights during Lent. They were organized and run by Fr. Tom Molloy who was also an avid bridge and chess player in his time and held numerous trophies for the games. There were many good whist players in the parish and the drives were popular and well supported up to the time he was transferred to Killmena, Westport in 1970. Whist was an easy enough game to learn but still it took a lot of practise and playing to become proficient at it. You also had the added strength (or weakness!) of having a partner in the game.

Whist is a classic English trick-taking card game which was widely played in the 18th. and 19th. centuries. Although the rules are extremely simple, there is lots of  scope for scientific play. It is a descendant of the 16th century game of trump or ruff. Whist replaced the popular variant of trump known as Ruff and Honours. The game takes its name from the 17th Century whist (or wist) meaning quiet, silent, attentive. Whist was first played on scientific principles by a party of gentlemen who frequented the Crown Coffee House in Bedford Row, London, around 1728. Edmond Hoyle, suspected to be a member of this group, began to tutor wealthy young gentlemen in the game and published A Short Treatise on the Game of Whist in 1742. It became the standard text and rules for the game for the next hundred years and led to the game becoming fashionable. In 1862 Henry Jones, writing under the pseudonym “Cavendish”, published The Principles of Whist Stated and Explained, and its Practice Illustrated on an Original System, by Means of Hands Played Completely Through, which became the standard text. Many subsequent editions and enlargements of this work were published using the simpler title Cavendish On Whist. By this time Whist was governed by elaborate and rigid rules covering the laws of the game, etiquette and play which took time to study and master. In the 1890s, a variant known as Bridge Whist became popular which eventually evolved into Contract Bridge. The traditional game of Whist survives at social events called whist drives. There are many modern variants of Whist played for fun.