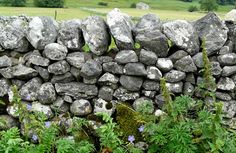 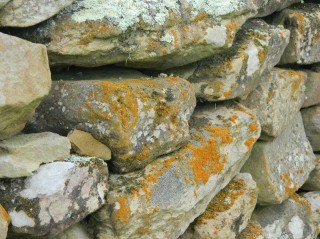 A Stone wall on which Lichen is thriving. Where you have Lichen such as this the air contains little or no pollution.
© Gerry Costello 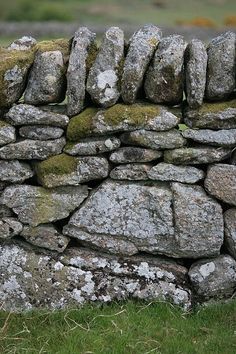 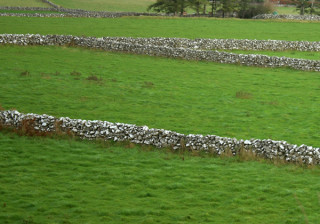 Stone walls are a common feature throughout the West of Ireland. Skehana and its surrounding areas are no different. It is something that you will notice in different townlands where stones were the most common form of fence building while in other townlands a ditch or to give it it’s proper name, a dyke, was the preferred method of fencing and creating a boundary. These simple but effective stone wall structures principally used as field boundaries were also, by default, a useful form of shelter from the wind and rain for some farm animals. In parts of England some farms have short lengths of dry stone wall in the fields which look like they are of no use and doing nothing. These are deliberately built for sheep to shelter from the ravages of the weather. Such a structure is known locally there as “a Bield” and are commonly found throughout the Yorkshire Dales. Stone walls are a distinctive feature of Ireland’s landscape and it is estimated that we have about a quarter of a million miles of stone walls all over Ireland. Many parts of Ireland and especially Ireland West is naturally a very stony, rocky and mountainous region. it was essential for stone to be cleared away in order that the land be farmed. Since the stones were there and man had to turn to, and make use of what the gods provided ……..  and  ……. there was a necessity to create boundaries, the obvious thing to do was to build walls.

The walls were built without mortar and hence are called dry stone walls. To date the oldest known example of dry stone walls in Ireland are at the ‘The Ceide Fields’. These were erected 5,800 years ago. The most common type of wall which one will see in this area is described as a “Single Stone Wall”. This is the most “economic” when it comes to the amount of stones needed. The large stones are placed at the bottom or base and as the wall gets higher the stones usually get smaller. This type of wall is easily knocked down by animals but easily repaired again. In all to the “estate” walls and boundaries between landlords you will notice a better quality wall. They are generally called “Double Stone Walls”. These are built with two faces – a front and a back – with long narrow stones strategically placed to be used as wall ties to keep the two sides bound together. The centre is filled with smaller stones. These are much more difficult to erect, much harder to knock and give a better life span with low maintenance.

For many visitors to Ireland, their abiding memory of the scenery is not the great sweeping seascapes or the ancient mountains shrouded in mist, but these tiny fields emerging from the stony land, surrounded by thousands of miles of stone walls and the enormous efforts it must have taken in both time and labour to put them there in the first place.

Dry stone walls are not merely piles of stones. They live and change with the season. Like a good bottle of wine they improve as they mature, becoming a home for all kinds of wild animals and birds. In the Winter they glow with lichens and mosses and in the Summer they come alive with ferns, grasses many other wild flowers. They are the thread that links the fields of the area to one another and they are also the threads that link the people and, particularly, the Farmers to the land.