You are here: Home>Topics>Events and Happenings>The ffrench Connection - August 18th. 2013

The ffrench Connection in Monivea 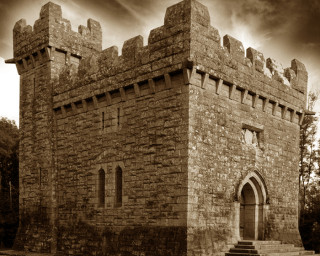 On Sunday August 18th, the Skehana & District Heritage Group held a walk in the woods in Monivea Demesne as part of its contribution to National Heritage Week. The selection of this location was not only to enjoy the sheer beauty of the area but also to provide some information of the very important and influential ffrench family who, as well as being one of the fourteen tribes of Galway city, and being synonymous with the Monivea area also had a significant presence in the Skehana and Menlough areas over many centuries.
Ireland in the 1650s lay in ruins after twelve years of calamitous warfare had destroyed the country’s infrastructure and resulted in the death of over 20% of the Irish population. The armies of the English Commonwealth, commanded by Oliver Cromwell, emerged victorious and immediately undertook an ambitious project of social engineering, underpinned by a massive transfer in landownership from Irish Catholics to English Protestants. For this to happen, the land had to be accurately surveyed and mapped, a task overseen by the surgeon-general of the English army, William Petty.

The Down Survey of Ireland was first undertaken in the 1650’s, and this was the first ever detailed land survey carried out anywhere in the world for an entire country. It sought to measure all the land to be forfeited by the Catholic Irish in order to facilitate its redistribution to Merchant Adventurers and English soldiers. Copies of these maps have survived in dozens of libraries and archives throughout Ireland and Britain, as well as in the National Library of France. The survey gave a very detailed analysis of the landholders with the first reference year being 1640 and the second one being 1671.

At a more local level it is highly significant that a very large amount of this information has survived and gives us new and informative details about our townlands and landowners in Skehana and Menlough. The Ffrench’s arrived in Ireland in the 12th century but did not move to the west until the 16th century and while their base initially was in nearby Monivea Demesne they did not have a presence in the Skehana or Menlough areas as we know them today until the 17th century and 1671 Patrick Ffrench controlled the lands of Doonaun, Esker, Garbally, Pollacrossaun, Kilbeg, Corrandoo and Knockcorrandoo while Matthew Ffrench controlled the lands of Menlough Eighter, Menlough Oughter and Menlough Commons. Over the next two centuries their presence became more expansive and while they still retained all of the above townlands it is recorded in Griffiths Valuation of Tenements of 1855 that they now also controlled Ballybaun, Ballynamona, Carrowferrikeen, Carrowmore, Derryglassaun, Gorteendrisagh and Gortnaglogh. These townlands are in the civil parish of Moylough and cover the most southerly section of that parish.

Other townlands such as Skehanagh, Clooncurreen and Guilka were owned by the Fitzgerald-Kenny family and further north the O’Kelly’s and later the Jamesons were the landowners of Windfield Upper, Lower and Demesne in addition to Mullaghmore North, South, East and West while John Cannon Evans, who resided in Cross House in Cross Eighter was the landlord for Ballinrooaun. The ffrenchs did however did have dominion over the townland of Cooloo also.

The attendees were welcomed by Sean Conneely, chairperson, as he gave a brief history of the construction and evolution of Monivea village and the basis for its foundation revolving around the linen industry as introduced by the ffrench family before a leisurely walk through the pines and native broadleaf trees led the group to the Mausoleum which is a true ‘gem in the forest’. This was constructed by the French family, from Wicklow granite, to house the remains of its deceased family members. On its steps the groups interest was captured as Tom Ward delivered a history of the ffrench family, both in Ireland and abroad, and with his immense knowledge of the area, having grown up in nearly Corrandoo, this was imparted most thoroughly and eloquently. Tom traced the history of the family from its arrival or our shores in the 12th century to its final days just in the last century with this Mausoleum bring their final resting place and also detailed the construction and design of this majestic piece of architecture. Attendees had the rare opportunity of entering the building but the tour was confined to the ground floor as access to the vaults and first floor level was restricted for time and safety reasons given the large numbers involved. It was then onto the Ice House which has been tastefully restored to its former glory and Michael Conneely gave us a history of the general uses of ice houses, how they actually functioned and how they allowed people not just to eat seasonal foods but how to preserve foods thus allowing them to be used at much later times. It was then onwards to view, in the distance, the remains of the tower house that is Monivea Castle and the courtyard of the ffrench residence though the residence itself is no longer there. Again Michael led us firstly through the history of the castle itself and that later additions made to it when acquired by the ffrench family to include an annex which was considered a ‘big house’ and courtyard and how it acted as a command center for the activities of running a 10,000 acre estate and onward from its peak of operation to its demise. He detailed the particular activities of the operation as well as giving us an insight into the occupations and numbers of the residents and employees. Great credit is due to Michael for the detailed research that he carried out in such a short period and for the associated hand outs that he published to include photographs, maps and information.