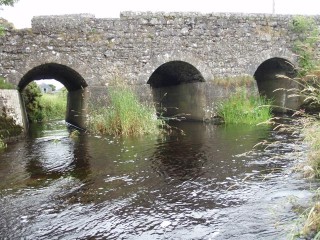 The Abbert river can be found flowing through Kilbeg, Killaclogher, Clooncurreen and on  through Abbeyknockmoy to join the Clare river at Anbally leaving the Abbert River a tributary to the River Clare. It looks like a typical, sluggish lowland river. However, when the river channel was being enlarged by blasting in 1955, the river suddenly disappeared down a hole in its bed. Flow was only restored when the newly opened swallow holes were blocked. Later, an extensive cave system was discovered at a depth of only a few metres below the surface and extending beneath the bed of the Abbert River. River water leaks into the cave at only a few points; the bed of the channel presumably being clogged with glacial clays. Although a shallow river trout are taken in the deeper sections. Hatches of olives in the spring are great. Best fishing is in April and September.