Skehana is home to an esker - a remnant of a melting glacier following the Ice Age. 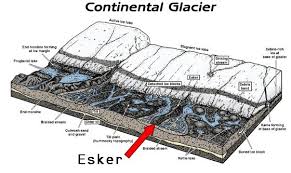 Diagram of an Esker
© Copyright Control 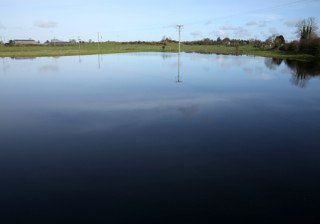 At its northern extremity the townland of Esker landscape is defined by an esker – a remnant of the glacial history of our past which has served to shape a predominant portion of Esker and its adjoining townlands. Eskers, named after the Gaelic word, Eiscir, meaning a ridge, form key elements of our geology, biodiversity and social history. This particular elongated glacial remnant commences in this townland and extends in a north easterly direction towards the town of Menlough (1).

Eskers often formed the basis for growth of herbs and flowers used for medicinal purposes in earlier times and for roadways such as the main Menlough to Monivea road which was part Bianconi coach network between Galway and Dublin. They were also home to very dense residential areas, much more pronounced however in the neighbouring townlands of Derryglassaun and Skehanagh as the esker increased in height, due to their solid and dry base while also providing adequate shelter and rich surrounding farmland. Eskers take the form of relatively low-lying ridges composed of sand, gravel and boulders; deposited by water flowing beneath a glacier; that became exposed when the glacier melted at the end of the last ice age, around 10,000 years ago. The Irish name ‘Eiscir’ provides an indication of the significance of the eskers, ‘Eiscir’ meaning ‘divide’. Much of this esker was excavated, both privately and commercially, as a source of sand and gravel for the construction of roadways, houses, walls and so on – a widely used practice throughout Ireland to enhance often inferior living and transport conditions. The impact of such operations is now being realized and this, along with a developing awareness of the ridge’s natural beauty and its significance in Ireland’s history, has led to increasing restrictions.

Today a part of the esker forms the foundation of a most modern sporting development (see details below) and it is itself the basis for such well-drained and high quality playing surfaces.

To this day, the Esker Riada continues to serve as a highway, the main N6 Dublin to Galway road still closely following it; and much agricultural activity still takes place along its length. Indeed, Offaly County has moved to give the ridge protection in its County Development Plan, and has gone so far as to press to have the Esker Riada recognized as a World Heritage Site.