This district is surrounded by bog lands used for turf cutting and as natural wildlife habitats. 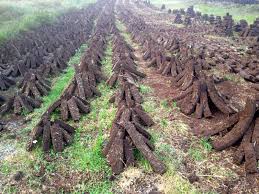 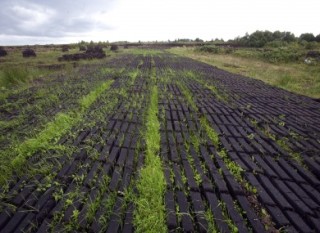 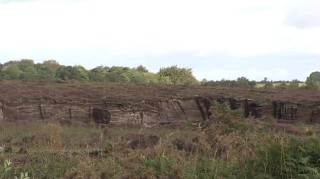 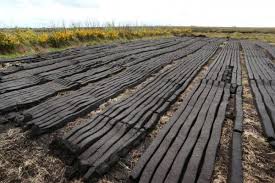 The areas of Skehana, Menlough, Moylough and Mountbellew are very fertile regions and most surrounded by bog lands. In Skehana we have Abbert bog to the West and Colmanstown and Pollnabrone bogs to the South. We are in the south west region of the larger area as described above.

A bog is a mire that accumulates peat, a deposit of dead plant material—often mosses, grasses and very old tree stumps and roots and in a majority of cases sphagnum moss. It is one of the four main types of wetlands. Other names for bogs include mire, quagmire and muskeg; alkaline mires are called fens. They are frequently covered in ericaceous shrubs rooted in the sphagnum moss and peat (Spog as the older people here used to call it). The gradual accumulation of decayed plant material in a bog functions as a carbon sink.


Bogs occur where the water at the ground surface is acidic and low in nutrients. In some cases, the water is derived entirely from precipitation, in which case they are termed ombrotrophic (rain-fed). Water flowing out of bogs has a characteristic brown colour, which comes from dissolved peat tannins. In general, the low fertility and cool climate results in relatively slow plant growth, but decay is even slower owing to the saturated soil. Hence peat accumulates. Large areas of landscape can be covered many metres deep in peat.


Bogs have distinctive assemblages of plant and animal species and are of high importance for biodiversity, particularly in landscapes that are otherwise settled and farmed.

After drying, peat is used as a fuel, and it has been used that way for centuries. More than 20% of home heat in Ireland comes from peat. Milled peat for burning as fuel for electricity generation by the local power stations is still a common practise. The other major use of dried peat is as a soil amendment (sold as moss peat or sphagnum peat) to increase the soil’s capacity to retain moisture and enrich the soil.

The peat in bogs is an important place for the storage of carbon. If the peat decayed, carbon dioxide would be released to the atmosphere, contributing to global warming. Undisturbed, bogs function as a carbon sink. As one example, the peatlands of the former Soviet Union were calculated to be removing 52 Tg of carbon per year from the atmosphere. Peat bogs are also important in storing fresh water, particularly in the headwaters of large rivers.

Blueberries, cranberries, cloudberries, huckleberries and lingonberries are harvested from the wild in bogs. Bog oak, wood that has been partially preserved by bogs, has been used in the manufacture of furniture and Art.