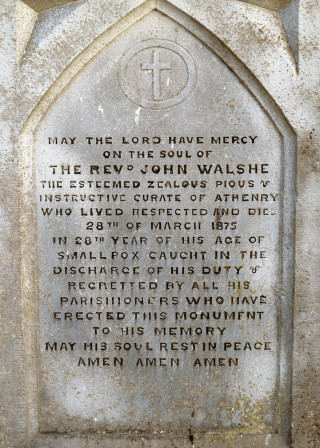 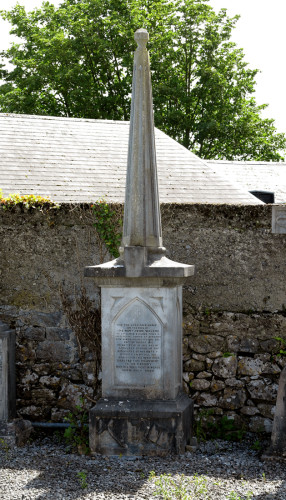 Fr John Walsh was ordained in Tuam on July 16th. in 1871 and took up ministry in Castlebar.  He was transferred as CC to Skehana in October 1871. He moved to Athenry as CC in 1872 where he then ministered until he contacted Small Pox after visiting a parishioner in a remote part of the parish and passed away on March 29th. 1875. He was in his twenties when he passed away.

Report from the Tuam Herald:

Death of the Rev. John Walsh. C.C.—We record, to-day, with much sorrow, the death of the Rev. John Walsh, Iate C.C. of Menlough. The sad event took place on Wednesday afternoon at the residence of his father, whither he had been, at his own request, removed a few weeks ago, that he might yield back his spirit to the God who gave it beneath the loved roof – tree of his infancy and boyhood. The career of Father Walsh in the priesthood was, alas ! a very short one. It extended over a few years only. Yet of him it can be truly said that in that short space he was made perfect, and fulfilled a long lime. For by his exemplary zeal, his self sacrificing devotion to the duties of his holy calling, and his edifying virtues — though young he ensured unto himself abiding glory among the multitudes to whom he ministered, and great honour with the clergymen of the diocese      (The Tuam Herald)

Report from the Mayo Examiner:

Tuesday last was the first occasion, since the sad occurrence of Father Walsh’s lamented decease and burial, both of which happened on the same day — owing to the disease to which he succumbed, the scourging small pox — that his brethren in the priesthood and the good parishioners could have a solemn requiem Mass celebrated for his happy repose. The shops of the town were all closed in sign of sorrow ; the spring’s work was, in the country districts of the parish, suspended, that all might be present, although the day was clear and fine, and farm tillage pressing. The largo numbers who attended at each of the private Masses celebrated from an early hour; the crowded congregation present at the solemn High Mass -, the neatness and taste displayed in the ornamentation of the green mound underneath which the remains of Father Walsh are laid to rest, give unmistakeable evidence of the genuine sympathy of the inhabitants of Athenry. Mass commenced at half-past ten o’clock. Celebrant, Very Rev John O’Grady, P P, Athenry, assisted by Rev Peter J MacPhilpiu, and Rev James Ronayne, C C, Athenry, as deacon and subdeacon ; and Very Rev Ulick J Canon Burke. as master of ceremonies. In the choir were — Rev . Peter Waldron, P P, Annadown; R«v John M’Gough, P P, Lackagh; Rev David Mylotto,  P P, Moore ; Rov Edmund Thomas, P P, Carnacon ; Rov Edward King, P P, Hollymount; Rev Thomaa Ronayne, PP, Mountbellew, Rev Henry Cahill, P P, Abbey ; Rev Joseph Judge, P P, Menlo : Rev Thomas M’Donogh, P P, Corrofin ; Rev Francis Arthur, PP, Craughwcll; Rev Thomas Walsh, C C, Robeen (brother of the deceasod); Rov Patrick O’Donnell, C C, Balla; Rev Michael Heaney, C C, Tuam; Rov James Kileen, CC, do; Rev James Hennelly, C C, Bekan ; Rov John Flatley, CC,  Churchfriars, Rov John McGreal, C C, Annadown ; Rev Patriok Fitzgorald and the Rev Fathors Blake, Hughes, Guinan, and Prendergast, of the Dominican Order. The sacred music of the requiem Mass was sung very sweetly and well by the talented organist, Mrs Egan, of Tuam, assisted by a really good choir.

At the conclusion of the Mass, Very Rev Canon Bourke, asking the prayers of the large congregation which crowded the church, spoke a few fooling words of the many engaging qualities which marked the lately deceased who was carried away so rudely from them by death. The regularity of his life, his unaffected, warm devotion, his learning, manifested by the beautifully solid discourse by which every Sunday and holiday he instructed his people, his attention to their necessities, and added to these, that sweet exterior which attracted all, made him especially beloved, and his death deeply regretted by the young and innocent children of the town. Of him as of his Divine Master, whom he so faithfully represented, it may be said with truth that he taught the people by word and example. Directing the attention of his hearers to the suddenness of death, and of the necessity of being always prepared for the last hour — that death may find us prepared as it certainly found the deceased pious young priest, he requested the prayers of the people, that God in his merciful goodness would remit any punishment that Father Walsh and to sustain in the next life mercifully open to him the gates of Paradise, and grant him the reward of the faithful and good servant, who was faithful over the charge entrusted to him.

The congregation were visibly affected, and the badly suppressed sighs and smothered sobs expressed strongly the sorrow of the people. — R.I.P.               (The Mayo Examiner)