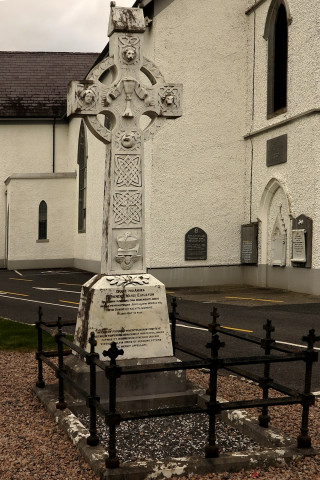 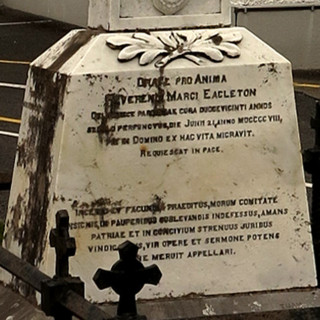 Fr. mark Eagleton was CC in Skehana from 1877 to 1881. In 1884 he was ministering as CC in Rosemount and in Ballinrobe by 1890. In 1891 he was CC in Leenane and in November of that same year he had transferred to Belclare, Co. Galway. By 1894 he had been appointed Parish Priest of Cummer where he took a keen interest in the political life and movements calculated to benefit the people. He helped many to effect provident bargains in the purchase of their holdings and as a Nationalist he was known far and wide, and his views were always regarded with respect by those amongst whom he ministered,  and in an especial manner was admired for his many amiable and upright qualities. He passed away in Cummer (Corofin) in June 1908 and is laid to rest in the grounds at Corofin Church.

In trying to unearth some information on Fr Eagleton I came across the following quotation from the Tuam Herald. It was submitted by Mr. John Quinn of Dollis Hill, London, and Ballinderry, and I quote; “Charles Stewart Parnell, the son of a landlord from Avondale, Co Wicklow, was the greatest politician Ireland ever had. It was his influence that finished the vice grip of the large landlords in Ireland. He never caught a gun in his hand. Col Nolan appreciated his good work and became an MP and staunch supporter. Nolan and his family members, including his mother, built the first school in Ballinphuil and called it the Ballinderry School. Archbishop McEvilly and Fr Mark Eagleton opposed the election of Col Nolan in 1906 due to the Parnell and Katherine O’Shea affair, which had nothing to do with Nolan. If it was proved that there was no coercion in the 1872 election after a very expensive trial, which cost Col Nolan and Bishop Duggan of Clonfert a lot of money, including the support of the leading lawyer Isaac Butt, well the 1906 election was full of coercion. The then Fr. Mark Eagleton stood at the door of the polling station in Ballinderry School and marked the cards of the old people in favour of Higgins of Monivea who was elected but died and is interred in Killererin Cemetery. Every parish priest was told to influence the people away from Nolan. Corofin GAA was blacklisted by Dunmore and Tuam and they refused to play them for ten years. My father and uncles worked for Col. Nolan and always praised him as a very fair man. Col. Nolan gave a speech on the same platform as Parnell at Parnell’s last meeting in Creggs, Co Galway, on the border with Roscommon. Col. Nolan was one of the few MPs to attend Parnell’s funeral in England and accompany his coffin to Dublin.”

From Philip H. (Philip Henry) Bagenal Papers, “The priest in politics” I find the following article and again I quote;

“Another priest, Rev. Mark Eagleton, was sent for trial on August 9th, together with eight laymen, on a charge of having engaged in a riot in the town of Tuam on June 29th, 1892. A platform, it seems, had been erected in the town for the purposes of one of the two rival factions, who entered into a quarrel for its possession and use. Evidence was given to show that Dr. Tanner, M.P., and Rev. Mr. Eagleton led a storming party, and captured the platform. Acting-Sergeant Wm. M’Auley, in reply to Mr. Blake, deposed that he saw Rev. Mr. Eagleton coming from the direction of the brake waving an umbrella over his head, and calling on the party behind him to come on and take the platform. The crowd then rushed over, and a free fight took place. He saw Rev. Mr. Eagleton striking some person on the platform with an umbrella, and he afterwards saw Rev. Mr. Eagleton bleeding. Mr. James M ‘Clean, a resident magistrate, on duty during the election, swore that he read the Riot Act, and endeavoured to put an end to the tumult. When he rushed in, they were using sticks and umbrellas all round. He added that Rev. Mr. Eagleton put an old hat on the top of an umbrella and waved it over his head, and shouted, ” The hat my father wore.” He continued to do this, although witness asked him to restrain himself. Rev. Mr. Heaney, whose assault upon Colonel Nolan has been described, also joined in the free fight, and fell fighting gloriously for ” faith and fatherland.” ” WE WILL CRUSH YOU WHEN WE GET THE POWER.”

“Much regret is felt at the death of Very Rev. Mark Eagleton, PP, Cummer, Tuam, Co. Galway which took place on June 21st. after a short illness. The spiritual father of his flock, Fr Eagleton, who was educated in the Irish College, Paris, was also their adviser in temporal matters and a sturdy advocate of their national claims. He took an active part in the various movements for the amelioration of the lot of Irish tenant farmers from the days of The Land League to the time of his death. He was a strong supporter of the demands of the tenantry for the break-up and distribution of the grazing ranches in Galway “