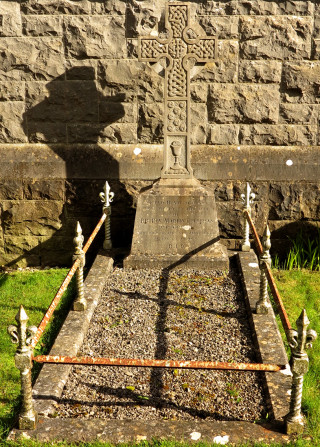 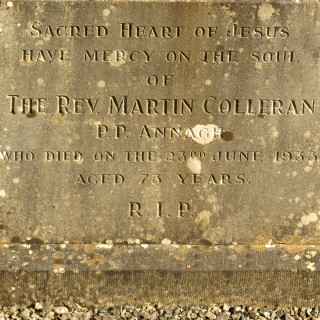 The inscription on the Headstone of Fr Martin Colleran.
© Gerry Costello Photography

Fr Colleran was born in 1856 and was a native of Annakeen, (Near Claren) Headford, Co. Galway. His father was James Colleran, Annakeen. He was ordained in Maynooth in 1883. His first ministry was as CC in Carna. He was then CC in Clifden and in 1887 moved to Skehana. His father passed away in December 1889 at the age of 71 and in less than a year later his brother, also named James Colleran passed away at the age of 22. In 1889 Fr Colleran contributed £1 towards the fund for the erection of a new school by the Sisters of Mercy, Tuam. He was in Skehana at that time. In October 1890 he appears in the Deanery of Castlebar being one of the priests who was making representations to the Government of the time on the plight of the people and the failure of the potato crops. In 1891 he was CC in Balla. He was CC in Milltown in June of 1894. In July 1895 a case was taken by Farrell McDonnell of Dunmore to evict Fr Colleran from his house at Cartron, Addergoole, Milltown. He was still in Milltown in 1898 but moved to Islandeady in 1900. In 1902 he moved from Islandeady to become CC in Kiltullagh. In 1903 he was CC of Cloonfad. In July 1907 he was appointed Adm of Achill. On November 16th 1907 he had a letter published in the Connacht Telegraph highlighting a threatened Famine. By 1913 he seems to have been made PP of Achill. In 1928 he was advertising for tenders to build the new Church at Achill Sound. In 1930 he was appointed as PP to Ballyhaunis. He initiated the setting up of a water scheme for Ballyhaunis and on March 12th. 1933 he saw his dearest hope and wishes brought to fruition when he was accorded the privilege of declaring open the waterworks. This was almost his last appearance as he was taken ill shortly after that. He passed away in Ballyhaunis on June 23rd. of 1933 and was laid to rest there on June 26th 1933. He had reached the age of 76 when he passed away. The Chief Mourners at the funeral were Mr James Colleran, Moylough (his brother) and the Colleran family from Moylough. At the time of his death he owned a Chevrolet salon motor car. In his will he made the following bequests. £50 for Masses to be said for him in a Church of Ireland. £200 for Masses to be said for him in Achill Churches by the priests of Achill. Should the said priests not desire to celebrate the Masses then the Archbishop of Tuam is to have them celebrated elsewhere. £100 was also bequeathed to the China Missions.