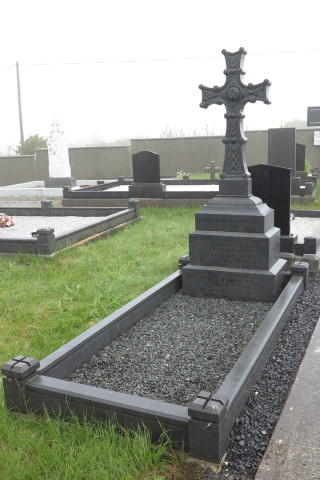 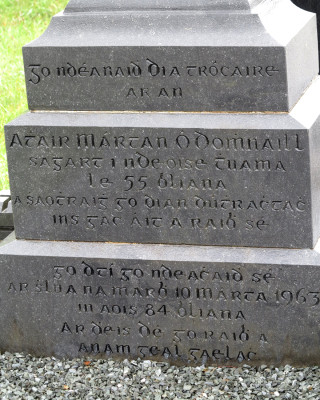 He was from Mulranny, Co. Mayo and born in 1880. His father was Niall O’Donnell. He had four sisters and four brothers. He was ordained in Maynooth in 1908. His mother passed away on July 25th. 1933 when he was CC in Kilronan on the Aran Islands. He ministered in Spiddal after he was ordained for two years and he was Professor of Irish at St. Jarlaths College Tuam from 1910 to 1914. In 1914 he was CC in Kilmaine. In 1926 he was CC in Keelogues. In 1934 he was moved from Arran to Clifden. He was still in Clifden in 1939 when one of his brothers passed away. He was transferred to Kilcoona (Corner Chapel) from Clifden in June of 1946. Another brother, John, passed away on July 13th. 1948 in Mulranny at the age of 80 years. in 1954 Fr O’Donnell was transferred from Kilcoona to Skehana.

He could be described as a republican and seemed to have sympathies in that area and especially towards local heroes. He delivered a lecture in June of 1912 in Newport on “The Life and Times of Fr Manus Sweeney”. Fr Sweeney was a priest who was executed in Newport.

Between 1914 and 1959 he had served in Killmaine, The Aran Islands, Keelogues, Clifden, Corner Chapel, Kilcoona and Skehana. When he left Skehana in 1959 at the age of 79, he effectively retired from parish ministry. However, he became chaplain at a Monastery in Errew, Castlebar until his death in Galway Regional Hospital in March 1963 at the age of 83 and is laid to rest in Murrevaugh Cemetery, Co Mayo. At the time of his death, he had one surviving brother and sister. During his lifetime he was the author of a history in Irish of The Aran Islands. During his time in Skehana he did not own a car but cycled everywhere he went.

The Story of Fr. Manus Sweeney:

In 1798 Fr. Manus welcomed and acted as interpreter for the French Captain, Boudet, who came to Newport after The Races of Castlebar. A week later, Fr. Manus was captured by Sir Neal O Donnell of Newport, but released after representation by Minister Herne. After the capture of Killala, by General Trench, Fr. Manus had to go ‘on the run.’ He spent seven weeks in hiding at Glenlara, 6 miles northeast of Newport and spent a further six weeks at Camploon near Newport where he hid out in a shelter beneath a stack of turf during the day and took some exercise by night to keep fit. He was accompanied by Neal O Donnell and his brother in law James Toolis to Glenamadoo. He travelled through Mulranny on his own against the advice of O Donnell who wanted him to go to Ballycroy. He made his way to Bealafarsad where Tomas Ban Cattigan gave him shelter and he remained a fugitive until he was captured in Achill, in May 1799. In June he was hanged on the evidence of O Donnell of and Reverend Michael Conway of Ballina. Following his trial in Castlebar Fr. Manus was transported on his own cart to Newport via the Carrickaneady Road, which then was the old Castlebar/ Newport Road. He was hanged publicly on the Market Crane in Newport and his remains are buried within the walls of Burrishoole Abbey.

The inscription on the gravestone of Fr. Manus reads:

He is fondly remembered in a ballad in the North Mayo Gaeltacht by the following words:

Ta a cholainn sa talamh is a anam i bhflaitheas.

(His body is in the earth, but his soul is in paradise).

A handsome monument was placed over his grave in 1922 and the inscription on the memorial reads: