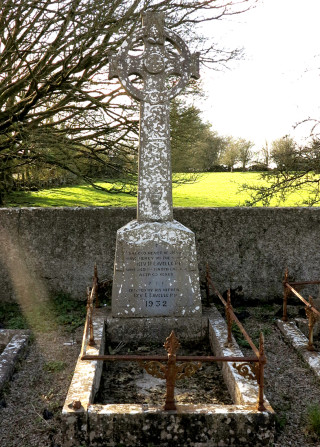 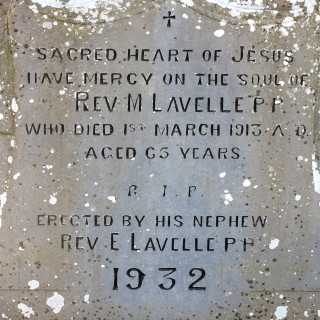 Fr Matt Lavelle was born in Kilgevrin, Milltown, Co Galway, in 1848. His first mission was in Achill. In October 1874 he was transferred from Moyrus to Crossboyne. He was appointed as CC to Skehana in 1884 at age 36 years. He was transferred from Skehana to Roundstone in June of 1887. Fr Lavelle was CC in Islandeady from 1889 to 1895. In 1896 he was CC in Clonberne. He was PP in Kilconly in July 1900 and was still there in 1911. Fr Matt Lavelle passed away in Kilconly on March 1st 1913 aged 65 years and is laid to rest in Kilconly Church Grounds.

In the Chancery Division on Tuesday, before the Master of the Rolls, in the matter of the estate of Rev Mathias Lavelle, P.P, Kilcouly deceased — Henry Concanon v. the Attorney-General, Most Rev. Dr. Healy, and others, defendants — a summons was heard for the determination of the question whether the legacy of £600 left by the will of the deceased to St. Jarlath’s College, Tuam, was a valid charitable bequest, or was void as an attempt to create perpetuity or otherwise. If valid the summons asked to whom the legacy should be paid, and if the trusts could be carried into effect without the settlement of a scheme, or, in the alternative, to have a scheme settled. The summons further asked that Michael Lavelle (Martin) one of the residuary legatees, and also a next-of-kin, should be named to represent the residuary legatees named in the deceased’s will

Mr Fetherstonhaugh, K C (instructed by Messrs Conway and Quinn) appeared for Mr Concanon, one of the executors, and stated the facts. The summons had been brought by direction of the Court on a previous day in order to have the validity of the bequest decided. The Attorney-General had been joined as a defendant for that purpose. The clause in the will of the deceased was as follows: — “I leave and bequeath £600 to St. Jarlath’s College, Tuam, the interest on which will go for ever to the education of my relatives in that college, bearing in mind that priority in the choice of them is always to be given to the most eligible, suitable, and best conducted, the selection to be left to the Archbishop for the time being, to a conscientious layman, and to the parish priest of the boy to be considered.” Mr Hynes, K C (instructed by Messrs Wm, Carey and Son), appealed for the Most Rev. Dr. Healy, and submitted that this was a gift to the College in the first instance, and then to the relative. The college was founded for educational purposes in general, and in particular of candidates for the foreign mission. Ho submitted on the authorities that this was a good charitable intention and that any defect in the machinery could not be allowed to defeat it. If the Court would not entrust the administration of the fund to the Archbishop, then counsel asked that a scheme should be settled.

Mr Reardon (instructed by Mr George Collins), for the. Attorney-General, supported the contention that this was a charity. Mr Devitt (instructed by Mr F B McDonogh) on behalf of the residuary legatees, argued that this was not a charity, and that the bequest was void. What the testator had primarily in his mind was not the benefit of the college, but to assist in the education of his relatives.

The Master of the Rolls reserved judgement.

The Master of the Rolls recently gave judgement in the proceedings (a report of which appeared in the HERALD) to determine the validity of a bequest of £600 made by Rev. Mathias Lavelle, deceased, to St Jarlath’s College, Tuam, the interest to be applied for ever for the education of testator’s relations in that College. The Master of the Rolls held that it was a good charitable bequest and, therefore, not affected by the rule against perpetuities, and declared all parties entitled to their costs out of testator’s estate.