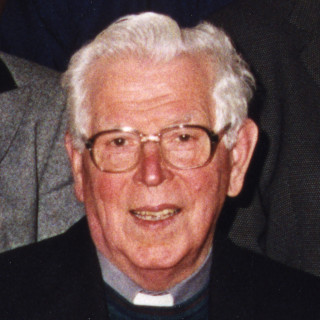 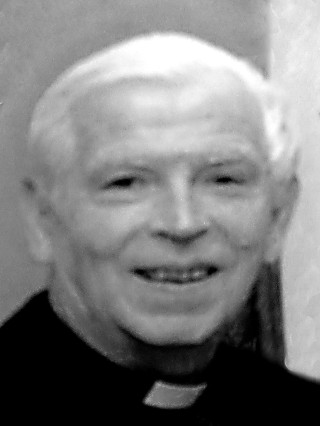 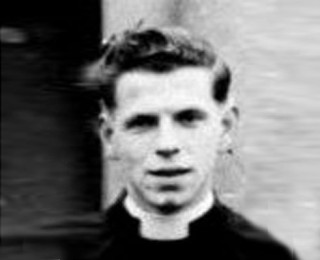 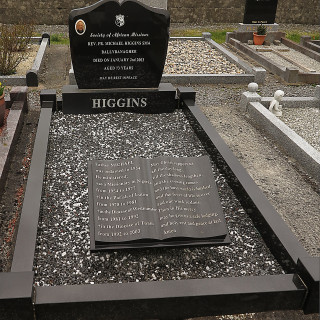 Fr. Michael Higgins came from Ballybanagher, Corofin, Co. Galway and was ordained in St. Colmans Cathedral, Newry, Co. Down on June 15th. 1954. He came to Skehana from his previous ministry in Claddaghduff but after just one short year in Skehana he was appointed AP of the parish of Robeen where he ministered until his death in January 2003. Fr. Higgins is laid to rest in Kilmoylan Cemetery, Ballyglunnin.

He was born Michael Anthony Higgins in Ballybanagher, Ballyglunin, Co Galway, in Cummer parish, in the archdiocese of Tuam, on 6th April 1930 and died in the Tallaght Hospital, Dublin, on 2nd January 2003. Michael, who was known as ‘Mick’ in the Society, came from a farming background in North Galway and was one of a family of six boys and two girls born to Patrick Higgins and Kate Dooley.

He received his primary education in Cummer parish before going to the Society for his secondary schooling. He attended the Sacred Heart College, Ballinafad, Co Mayo and St. Joseph’s College Wilton, between 1944-1948 prior to being promoted to the Society’s novitiate and house of philosophy at Kilcolgan, Co Galway with further studies there between 1948-1950. He received his theological formation in the Society’s major seminary, at Dromantine, Newry, Co Down (1950-1954). Mick was received as a member of the Society on 29th June 1950. He was ordained a priest, along with ten colleagues, in St. Colman’s Cathedral, Newry, by Bishop Eugene O’Doherty of Dromore, on 15th June 1954.

Following his ordination Mick was appointed to the diocese of Benin City, in mid-western Nigeria, where the bishop was his fellow-Galwayman, Patrick Joseph Kelly. He was to serve in this diocese until 1962, ministering first in Benin City and then in Sapele and Bomadi. With the erection of part of that territory as the diocese of Warri, under a Nigerian bishop, in March 1964, Mick was transferred to the new jurisdiction, continuing to work in Isoko country, serving in Oleh, Effurun and Ozoro. In 1969, returning to Ireland on leave, he applied for permission to spend a sabbatical year in pastoral work in England, signalling he did not intend to return to Warri. It is not clear what was at the root of this decision although he felt strongly that Nigerianisation of the Church required the withdrawal of European missionaries. He was also experiencing some differences with his bishop, mainly about pastoral policy and administrative matters. However it was also true that Mick was suffering the effects of fifteen years of pro-longed isolation and, more recently, no small share of overwork. Although not granted a sabbatical Mick’s superiors, as well as his bishop, agreed to his transfer from Warri diocese to Benin City diocese.

Mick was to serve in the Benin City jurisdiction, again under Bishop Kelly, between October 1969-1973. With the further division of that territory and the erection of Issele-Uku diocese in July 1973, Mick became a founding staff member of the new jurisdiction and finally in 1977 he was granted a long overdue sabbatical year’s leave, spending it as a curate in the archdiocese of Tuam.

A Change of Scene:

Feeling that his time in Africa was now at an end – he had spent almost a quarter of a century in the mid-West – he considered going to the USA to take up pastoral work. However at the time the Irish Province needed personnel to staff the Sacred Heart parish, Stopsley, near Luton, for which it had taken responsibility a few years earlier. He took on this responsibility in October 1978, serving as curate to Eugene Connolly. In 1981 the British Province of the Society took over the multi-racial St. John Vianney’s parish, in West Green, London. Needing staff, a request was made to the Irish Provincial for help. In the event Mick was seconded to the British Province and appointed parish priest. From 1986, when Dermot McCaul of the British Province took charge of St. John Vianney, Mick worked in the archdiocese of Westminster, ministering at Rickmansworth.

In June 1992 Archbishop Cassidy of Tuam approached the Society for someone to staff the parish of Claddaghduff, located west of Clifden, for a year. Mick was approached by the Provincial and accepted, taking up his duties in July of that year and he remained on in Claddaghduff for several years, after which he served in the church area of Skehana. Finally, in 1999, he was transferred to the parish of Robeen where he spent the remaining years of his life. In December 2002 Mick was admitted to Mount Carmel Hospital, Dublin, for a check-up as some years earlier he had suffered some cardiac problems and later was diagnosed with diabetes. While in Mount Carmel he was found to be suffering from cancer and was transferred to Tallaght hospital where he died. His funeral Mass was celebrated in the Church of Our Lady of Sorrows, Robeen, Co. Mayo.

A most accomplished sportsman during his student days in Cork he played football with St. Finbarrs’, winning two county minor titles. He played as full-back on the Galway minor team of 1948 and later, in 1954, as corner forward on the Galway senior football team in the All-Ireland senior semi-final alongside many of the greats that would eventually bring the Sam Maguire to Galway two years later. Fr. Michael Anthony Higgins is buried in Kilmoylan Cemetery, Corofin, Co Galway.