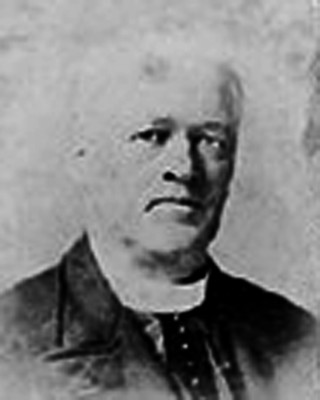 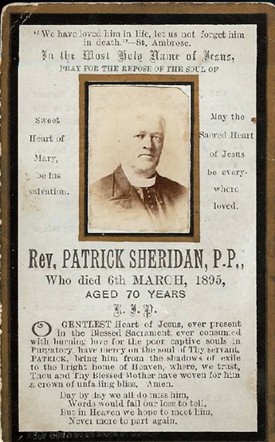 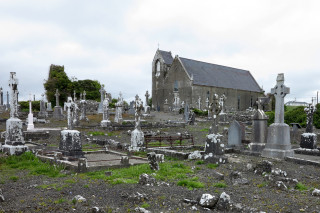 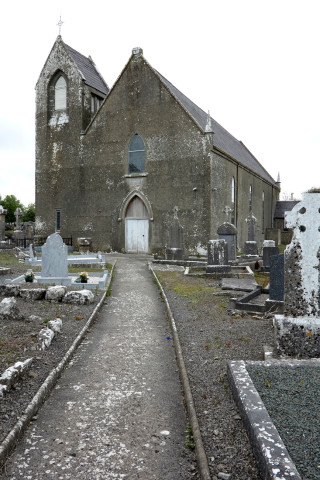 The old Church in Mayo-Abbey within where Fr Pat Sheridan is laid to rest.
© Gerry Costello Photography 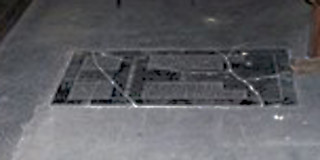 Final resting place and gravestone of Fr. Pat Sheridan inside the Old Church in Mayo-Abbey.

Fr. Patrick Sheridan was born in Westport, Co Mayo in 1825 and was the son of Patrick Sheridan who was a merchant on the Octogan and Bridget Horan from Louisburgh.On his arrival in Skehana he was 28 years old. On leaving Skehana in 1856 he transferred to Roundstone. He was still there in 1858. In 1862 he was CC in Athenry. In September 1865 he was transferred from Athenry to Ballyhaunis as Adm. He served as PP in Mayo Abbey 1870 – 1895. He passed away in Mayo-Abbey 1895 at 70 years. Fr. Patrick also had a brother Fr. Myles Sheridan who served as PP in Louisburgh. Before he passed away in 1895 at 70 years Fr. Patrick Sheridan had arranged for the building of a new school in his parish. He is laid to rest in the old church in Mayo Abbey.

Fr. Patrick’s father, Pat Sheridan, died in 1847 and generously mentioned Patrick in his will.

“…I will & bequeath the sum of 40 ster(ling) to my eldest son, Myles Sheridan, although he has pleased me very much. 9th, I will & bequeath the sum of 50 to my son, Pat Sheridan, now a student in the Royal College of Maynooth to enable him to finish his studies should the said Pat not be ordained I will bequeath to him the third part of my dwelling house, Bank House & Store and after my wife’s death, these properties to be equally divided between the said Pat and my above named son, Denis, provided the said Pat returned to worldly pursuits. 10th, I will & bequeath the sum of 5 ster to Mrs. Cullen, the superioress of the Convent of Mercy. 11th, I hereby nominate & appoint my wife Bridget and my son Denis Sheridan as my residuary legalies. 12th, I hereby appoint & nominate my said wife Bridget and my son-in-law Dominick McGreal as my executors to carry this my last will & testament with executors.”

On yesterday (Sunday) a most exciting scene was witnessed at Mayo Abbey, a small village two miles distant from this town, where a meeting had befell convened calling upon the tenant farmers of the pariah to become enrolled as members of the Balla Tenants Defence Association in conjunction with the Irish National Land League. At one o’clock, after Divine service, three members of the Balla association attended, and while the rules of of the association were being read before a large multitude of the peasantry, numbering at least four and five hundred, the Parish Priest, the Rev. P. Sheridan, called upon the people to leave, and continued shouting until he reached where a gentleman of the Balk Tenants’ Defence Association had been reading the rules of the association. Father Sheridan said that ho would not allow any man to interfere with his parish, and no secret organisation would be permitted to be carried on in his parish.

The Representative of the Land League— “This is no secret organisation. These are the rules laid down by the National Land League, and I am here as their representative” (great cheering).

A Voice— “Three cheers for Parnell and Davitt” (great cheering).

Father Sheridan here called upon the people again to leave.

A Voice— “We won’t leave until the Balla man leaves. He is for our good, and trying to save the people from starvation”.

Father Sheridan then moved closer to the speaker, ordered him leave the place, and said that he was not the man that should be listened to by any person, that he was no representative of the National Land League, and was “a man of straw.”

The Speaker, addressing him, said that he was surprised at the language which he had used. The crowd was by this time greatly excited.

Father Sheridan said— “You are no president”.

Tho Speaker— “It rests with the audience to judge”,

Here again Father Sheridan called upon the speaker to leave, and ordered the crowd to disperse, The Speaker, addressing them, said if they chose they could go away, for he didn’t care about keeping any man there who did not think it was to his benefit to do so. What he had read to them were the words of Sir. Parnell — the words of justice and the words of truth — that they wanted no money from any man.

Father Sheridan said— “I do not want money either”.

Alter a short interval, the rev. gentleman returned to his house, and the speaker explained the object of his visit with reference to the Defence Association. Finally the speaker informed the assembly that he would attend there on a future day, and take the names of all persons who were anxious to become enrolled. Having read an extract from a book written by a Mayo parish priest, the members proceeded to Balla by car, followed by a number of people who cheered him lustily. Some half a dozen of the Royal Irish Constabulary had been present during the proceedings.