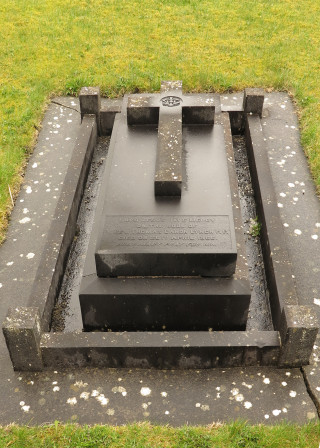 Fr Tom Crean Lynch was ordained in Carlow by Bishop Foley on June 4th. 1898. He was the son of George Crean Lynch from Brownville House, Doogra, Kilbannon, Tuam, Co. Galway. His brother, Andrew, whose address was in Kilbannon applied to the Mountbellew Petty Sessions to Sir Henry Gratten Bellew in June 1904 to be put forward as a candidate to be elected a Magistrate on the retirement of Magistrate O’Connor. He had a number of brothers also – one was a priest, Fr Francis Crean Lynch in the Tuam Diocese and the other was Andrew Crean Lynch who continued to live in Kilbannon and another, a Mr E Crean-Lynch B.E. lived in Kinvara. He had two sisters in the nuns. Sister Josephine and Sister Baptista. Sr, Josephine passed away at the age of 46 in the Convent of Mercy, Claremorris at the end of May 1916. A third sister, Agnes, was married to a Dr. Egan and lived in Kilconnell, Ballinasloe and a fourth sister, Delia, lived in Tuam. She was resident in Skehana with him on the Census night of 1911. He came back again to Skehana in 1910 until 1911. He had family connections with the Fitzgerald-Kenny Family who built Skehana Church. Click HERE to see his return for the 1911 Census. In 1911 he was just 38 so in the his first ministry in Skehana he was 29. In July 1911 he was transferred to become CC in Kilkerrin. I notice that he was CC in Athenry in 1924. In 1937 he was PP in Lackagh. His father, George, passed away at his residence (George’s) at 40 Iona Road, Drumcondra, Dublin on the 9th. April 1939. At this time Fr Tom Crean Lynch was PP in Lackagh, Fr Francis Crean Lynch was CC in Milltown and Sr. Batista was now Mother Baptista in Tourmakeady Irish College. Andrew Crean Lynch (George’s other son was still in residence at Brownville House, Doogra, Killbannon. George’s funeral was held at the Cathedral Tuam and his remains were laid to rest in the family vault in the new cemetery. Fr Thomas Crean Lynch ministered as PP in Lackagh until his death on April 25th. 1966.

NOTICE is hereby given pursuant to the Charities Act of 1961 that the above named deceased, who died on the 25th April 1966 by his Will dated the 6th March, 1962, first codicil thereto undated and second codicil dated 6th October, 1963 bequeathed as follows:— £100 each to Rev. Thomas Crean Lynch (Nephew), Rev. Matthew Egan and Rev. Joseph Crean Lynch for Masses (£1 each Mass) £200 towards the upkeep and repair of the Parish Church at Lackagh. £200 Rev. Mother Sisters of Charity Collarne for Charitable purposes of her Order in Republic of Ireland. £500 Superioress Medical Missionaries of Mary for Charitable purposes of her Mission In Republic of Ireland. £500 Pontifical Society for Propagation of the Faith. £250 Superioress Sacred Heart Home Drumcondra for Charitable purposes of her Order in Republic of Ireland. £200 Rector Redemptorist Fathers, Galway for Masses (£1 each Mass). £300 Said Rector Redemptorist Fathers for such Charitable purposes in the Republic of Ireland connected with their Order as he shall In his absolute discretion think fit. All Books, Silver, Silverware and Cutlery to said Redemptorist Fathers. Half Residue to said Redemptorist Fathers, Galway, for Masses (£1 for each Mass). Probate of said Will and Codicils Issued to the Rev. Thomas Crean Lynch, C.C. of Knock, Co. Mayo and Peter O’Brien of Cahermaculick Shrule, Co. Mayo, Farmer, the sole Executors. Dated the 29th day of January, 1970. Signed: CONWAY and QUINN, Tuam, Co. Galway, Solicitors. To: The Commr. of Charitable Donations and Bequests and all others concerned.

Fr. Francis was ordained in Maynooth in 1912. He was in 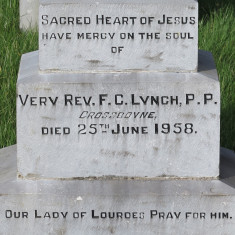 Roundstone for three years until 1915. He was CC in Monivea from 1915 until 1919 and then he was transferred to Tuam as CC until 1929. He then became CC in Clonberne until 1932 when he was appointed CC of Ballinrobe. In 1935 he moved to Milltown where he remained as CC until 1942. He was then appointed as PP to Crossboyne where he remained until his death on July 2nd. 1958.

On June 29th. 1941 Andrew’s son was ordained in The Mercy Convent, Tuam. His name was also Fr Thomas Crean Lynch. His mother, Joanna, passed away in March 1984. His final ministry was as PP of Kilkerrin from 1980 until 1990 where he passed away on January 6th. 1990. He had two other nephews ordained as priests, Fr. J Crean Lynch C.SS.P. in Niarobi, Kenya and Fr Matthew Crean Lynch O.C.S.O. in Roscrea.

The Final resting of Fr Thomas Crean-Lynch (the second) at Kilkerrin Church.