The Stations were celebrated twice each year in the spring and autumn in each of the station areas in the parish. 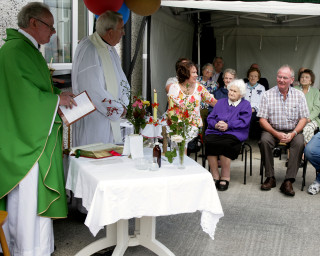 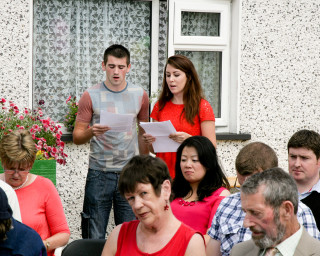 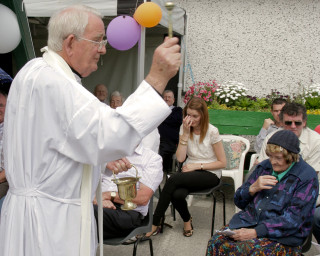 The tradition of “The Stations” dates back to the Penal Laws, when it was forbidden for Catholic priests to say Mass and for the public to attend Mass. To get around the problem, the Mass was often celebrated secretly in people’s homes. Word secretly went out around the village and a few families gathered at a certain house on a certain day – usually around 8.00am – and the Mass was celebrated by the priest. Afterwards, those in attendance stayed on for breakfast. This was often followed by a full day of merriment – but only after the priest had finished his breakfast and taken his leave. Then the people could let their hair down and party for a little while. As the years went by, and the Penal Laws were repealed, the custom of “The Stations” continued, especially in Ireland’s more rural areas. Skehana, Menlough and the surrounding parishes were no different and “The Stations” continued until recent years. There were “Station Areas” set up with maybe eight to fifteen houses in each area and the stations were held twice yearly in each of the Station Area. It would start a the first house and continue next time to the next house and so on until the last house was finished and then it restarted at the first house again. People took turns every few years to have the Mass said in their home for family, relatives, friends, and neighbours. It was considered a great honour to host the stations and preparations for it started months in advance.

There’s many a family who has used this occasion as a valid reason to get all kinds of home-improvements started – and finished – as the station morning was a deadline set in stone. During my time as a mass server I entered many a house on the morning of the stations to the aroma of fresh paint that should have bourn a sign “WET PAINT”. Outside the house, everything was usually given a fresh coat of paint or whitewash during the dry days previously; gates were fixed and painted, leaky roofs were mended, the eve gutters were cleaned down, the yard got a fresh coat of sand and all potholes filled in and the gardens were tended. Everything had to be perfect because the neighbours were coming along. Mind you, the neighbours were around every day of the week so they knew that this was not the normal state of events and that the “boat was being pushed out” a bit !

Inside, a mammoth cleaning took place and there would certainly be a flurry of wallpapering and decorating. Everything was dusted down (with the turkey wings), and there was washing and scrubbing everywhere. The concrete kitchen floor might even get a new covering of Lino. Once satisfied with the appearance of the home, the hospitality of the house took centre stage. The parlour that was a “no go area” all year was now opened up. The table was covered with an embroidered linen tablecloth and set with the best china and cutlery that only saw the light of day at station time even though the woman of the house would like to believe that the priest and all who attended went away thinking that this was the normal practise in the house every day. Mass was usually said in the kitchen and the kitchen table used as an altar. This was covered with a starched white  linen cloth, kept just for the occasion.

In my young days a story was told many times by various people of a man who lived alone in the Windfield area who was due to have the stations but no preparations were apparent. The neighbours would ask now and then how he was getting on in getting the house ready and he always said “everything is fine and I’ll be ready on the day”. On the morning of the stations a crowd gathered outside and when the priest came and banged on the door to get in our man stuck his head out the top window inquiring as to why everyone was there. The priest said they were here for the stations to which our man replied “sure thats not until tomorrow”. Having been assured it was today the man said “I thought it was tomorrow and I’ve nothing ready today but sure the table is there if you want to say Mass”. The Mass completed everybody went home and had to get their own breakfast.

Early in the morning of the big day, the woman of the house, and perhaps a few friends, would have been up since dawn making final preparations for the breakfast; the children would be sent to gather fresh flowers which were used to decorate the home throughout; Two brass candlesticks with new blessed wax candles were placed at each end of the altar. A Crucifix was placed in the centre with two vases of fresh flowers again on each side and the rest was left to the priest when he arrived. The family members then spruced themselves up in their Sunday best, so that all was in readiness before the guests arrived. Relatives, friends and neighbours arrived first, and as soon as the priest and servers arrived the priest was taken to the parlour to began to hear confessions, while the servers set up the altar for the Mass. The altar stone was placed in the centre and covered by a white altar cloth. This was again covered by a second and third altar cloth. The Cruets for the wine and water were prepared and set at the side of the altar and on the other side the Vestments were laid out for the priest. A bowel of holy water would be provided by the house together with a sprinkler which used to be made of rushes or sometimes a bottle brush was used. As the priest vested in preparation for Mass a count was made on how many would receive communion and he allocated enough hosts for this amount and took out the chalice for the Mass. In those days it was forbidden for us ordinary motels to touch or handle the sacred vessels or the concreted host itself. Even then, the purifier, (the small cloth that is used with the chalice had to washed in three separate vessels of water by the priest himself before it would be sent to the laundry.

As soon as Mass was over, the priest took out his book and called out the names of each family whereby a representative from that family would proceed to the altar to pay the “Station Money” which was a collection for the upkeep of the priests of the parish. All the station money collections, Christmas Collections, Easter Collections, Harvest Collections would be put together and would be divided between the two priests of the parish with two thirds going to the parish priest and one third to the curate. Sometimes the bishop did not appoint a parish priests to a parish but appointed an administrator instead. This being the case, then the bishop, himself, became the parish priest of that parish and he became entitled to the two thirds with the administrator and the curate sharing one third between them. This practise was ended in our Diocese by the late Bishop Cunnane in the second half of the 1970s. Back to the Stations …………… the next family to have the Stations would be selected – well they were the nearest neighbour anyway. The priests would then sit down in the parlour with a selection of the assembled company who would be chosen by the woman of the house as “the best people who could talk to a priest”. A hearty “breakfast” of a starter of grapefruit followed by a cold meat salad, accompanied by copious amounts of strong tea, bread, sweet cake and fruit cake was served. This was followed by a desert of sherry truffle with tinned peaches, strawberries or pears. The servers would get a bite to eat in the kitchen and maybe a few shillings now and again.

The Stations were officially over when the priest departed. However, in this area, this was when the real social celebration began. The rest of the crowd would now sit into a feast and this time a drop of “whatever you are having” would be served to all with round two and even round three also. The conversation got louder now that the priest was gone. At around noon or so the party would break up but all were invited back again that night for a party with the spouses and if the one attending that morning could not come they would be warned to be sure and send “the other half” along to the night time party. After school the local children were brought in for a party of their own which usually ended around five or so. The night party would commence about eight and it would be well attended. There would be music and dancing sometimes but a sing-song and story telling would be a certainty. The celebrations could continue into the early morning.