Originally an O'Concannon house served as a relief hospital following The Great Hunger. 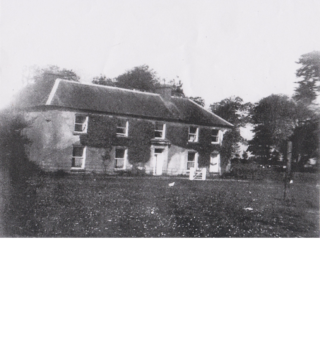 Carrownacregg House was located in the townland of Carrownacregg West and the Down Survey indicates that prior to the Cromwellian upheaval of the 1650s this area, then called Carronocirgy, was ruled by Connor O’Kelly and by 1670 it was ruled by Patrick Bellew.

These lands were later granted to Sisby O’Concannon, by patent, dated March 21st 1678 with the Concannons being former Gaelic chiefs in the Kilkerrin area. Waterloo would replace Carrownacregg as their main family residence in the early 19th century and in 1824 Edmund Concannon, of Waterloo Lodge, is recorded as a resident proprietor in county Galway. He married Jane, daughter of John Blake of Belmont and his wife Sarah Cuff, sister of Baron Tyrawley. Blake Foster records that they had six sons, the eldest, Henry, was a barrister and married Countess Maria Aurora Arabella de Luicia. The third son, Edmond, married Kate Parsons and they had a son, Edmond John. James Blake Concannon of Esker was the fourth son. Over 3000 acres owned by Edmond John Concannon and Edward Thomas Beytagh, were offered for sale in the Encumbered Estates Court in 1851. Much of the land was in the baronies of Clare and Dunkellin, and some of it was on perpetual lease from the Clanricarde estate.

At the time of Griffith’s Valuation the Concannons held land in the parish of Killoscobe, some of which was leased from Walter Joyce of Corgary, and also in the parish of Grange, barony of Loughrea. Henry Concannon sold Carrownacregg West, including a mansion ‘out of repair’, to James Browne in 1851. James Browne, a brother of Edward Browne of Ardskea, owned 2 townlands in the parish of Killoscobe, at the time of Griffith’s Valuation as in 1851 he also bought the townland of Killoscobe from George Ruttledge. James Browne owned 574 acres in the 1870s and his wife Julia owned 947 acres in county Galway. James’s grandson Michael Browne died in 1909 and the land was purchased by the Land Commission.

In a Browne genealogy in the James Hardiman Library, NUI, Galway, the ancestry of this branch of the Browne family is traced back to Dominick Browne of Barna, Mayor of Galway in 1575. In 1677 Edward and James Browne were granted Ardskea and other lands in the parish of Kilmoylan under the Acts of Settlement. Family members intermarried with the Brownes of Tuam, the Kirwans, O’Connors, O’Kellys and the Nolans. The Brownes were still resident on their Ardskea estate at the time of Griffith’s Valuation but by 1890 James Browne had sold over 800 acres of his Ardskea estate in the Land Judges’ Court. The petitioner was Emmanuel Churcher. This Browne family also owned estates in Cooloo in the parish of Moylough and also in barony of Ross. By the 1870s Cooloo was in the possession of Michael O’Kelly.

It is also significant to note that during the Great Hunger, Carrownacregg House was used as a fever hospital. It had been idle for a few years prior to the famine. A petition was sent to Dublin to the Commissioners of Relief for financial assistance to open a relief hospital in the area and they were granted permission so they opened up Carrownacregg House. A doctor was appointed and a number of patients were taken in. It was written after by a Dr. Butler in his medical report on November 7th 1849 that 471 people had been treated, of which 141 had dies. It was reported as being one of the highest rates around the country as a fever hospital.

The overcrowding was to great and the deaths so regular that a man was appointed to take away the corpse and bury them. The late Nicholas Hughes, who would later be born in that house, recalls hearing from older people that corpses were buried locally in sandpits and it was said you could hear crying at night coming from the sandpits, and this was called ‘clois na scread’. By 1850 upwards of 245 people had died there.

It became the property of the Hughes family, who originated from Mount Mary, circa 1911 and that family remains in situ today.

The Skehana & District Heritage Group wishes to acknowledge the assistance of Mrs Evelyn Hughes and Nicholas Hughes (Junior) of Carrownacregg for their great assistance in providing materials for this article.

We dedicate this article to the memory of the late Mrs Regina Long (nee Hughes) who was involved in most of the research and compilation of information contained in this article and much of which was printed in The Tuam Herald of July 27th, 1991.