Home of the Bellew family who were the founders of the town of Mountbellew. 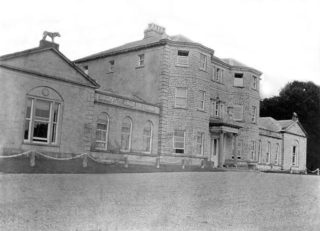 My location
Get Directions

The Bellew family of Williamstown, County Louth, were granted lands in the parish of Moylough, baronies of Tiaquin and Killian, under the Acts of Settlement, patents dated 26 Nov 1677 and 21 Mar 1678. They founded the town of Mountbellew and built a large house. The Bellews remained Catholic and although they owned a large amount of land they were not averse to engaging in business enterprises, such as flour milling. They intermarried with the Dillons, Nugents and Grattans, assuming the additional surname of Grattan in 1859. In 1838 the head of the family, Michael Bellew, was created a Baronet.

In the 1870s the Bellews owned over 10,000 acres in county Galway and almost 1,895 acres in Co. Roscommon (parish of Cloontuskert, barony of Ballintober South and Cloonfinlough, barony of Roscommon). In the 1880s Bateman notes that the family also held substantial property in Queen’s County [Laois]. The Bellews retained these acreages in Galway and Roscommon until the early 20th century. By March 1916 the Bellews had accepted an offer from the Congested Districts’ Board for over 1,000 acres of their estate. The estate was taken over by the Land Commission in 1937.

The house was a three storey house built in the 18th century and in 1786 Wilson refers to it as the seat of Michael Bellew. Extensively renovated in the mid-19th century and valued at £80 at the time of Griffith’s Valuation, it was demolished in the late 1930s.

Another house, occupied by Peter Geraghty in the 1850s when it was valued at almost £9, was later recorded as Castle Bellew House on the 25-inch Ordnance Survey map of the 1890s. It is, however, no longer extant with some ruins remaining at the site.

A third residence occupied by William Dillon in 1814, by P. Cruise in the 1830s and by John F. Browne at the time of Griffith’s Valuation when it was valued over £5 and was part of a farm of over 250 acres. Peter Tyrell was leasing a mill at Greenville from the Bellew estate at the same time. Buildings, including the substantial stables, still exist at the site.